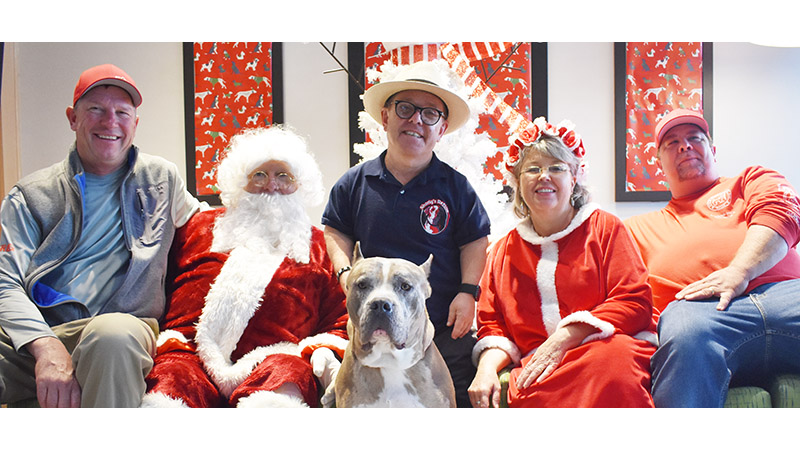 Celebs, including some from the North Pole, were present at the Holiday Inn Express in Farmville on Sunday as part of the Southside SPCA’s 10th Annual Holiday Donation Drive. Above, from left, are Greg Mayer, Santa Claus, Shorty Rossi, Mrs. Claus and Steve Smelcer. The group poses with pitbull Ares who Rossi rescued from Tijuana, Mexico.

Rossi, a champion of the pit bull breed of dogs, has been coming to the Donation Drive for the past two years to present a program to advocate for the breed.

On Sunday, Mayer educated audience members on the topic of imported seafood, noting there’s nothing fresher than local fish.

Residents in attendance Sunday also heard from local volunteers and veterinarians and got the chance to meet special guest Goliath, a rottweiler who has an incredible memory and can retrieve approximately 300 different everyday items on command, including his many beloved stuffed animals.

Sunday marked the closing of an exciting weekend of fundraising events for Southside SPCA. On Saturday, Dec. 4, the organization held its 10th Annual Holiday Gala presented by Haley Auto Mall.

The night included a live and silent auction, food and fun.

According to SPCA Board of Directors Member Steve Smelcer, the organization estimates funds raised across the two days of events will total approximately $20,000.

On Monday, Dec. 5, Smelcer thanked the organization’s many donors and celebrated the successful weekend.

“Our supporters are who keep the shelter open and keep things running because we are totally donor funded, so without them, we would not be able to do anything. We can’t stress enough how important our donors are to the organization,” he said.

On Sunday, Rossi encouraged those who are able to do so to donate toward the Southside SPCA.

“Donating and giving your time and effort to help them will help the animals, and that’s what it’s about.”

To donate toward the Southside SPCA, go online to http://southsidespca.org/get-involved/donate-online/.