Christmas in the country, 1955 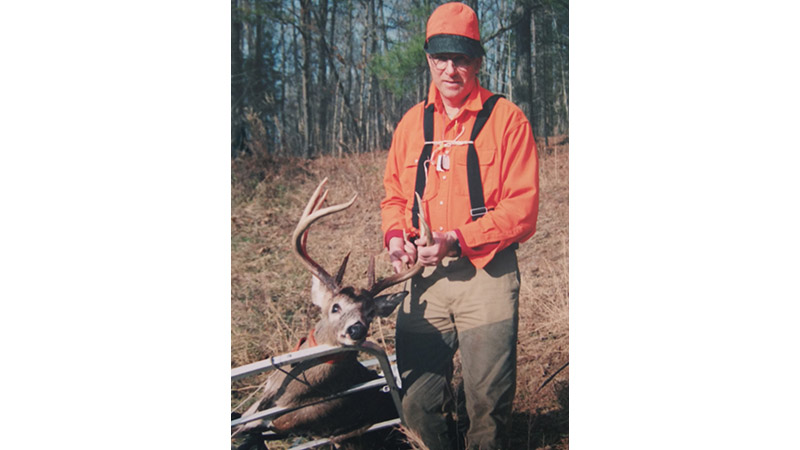 When Caryl, my sports seeking wife, was age 2 and I was age 12, Nell, my mother, decided that I should spend Christmas in the country at the Fitzpatrick farm in Buckingham County near the Willis Mountain where she was raised. My father had died that year and Metellus, Mom’s brother who lived on the family farm, seemed like a good male influence. Why? Because he loved to be in the woods and to hunt, same as Nell. He was as ornery as they come and took no guff off anybody, especially a tenderfoot kid.

Nell packed me two cardboard boxes of groceries for my survival training and told me I was responsible for our two English Setters, Jack and Fannie. Tellus picked me up at Mom’s at Kingsville near Hampden Sydney and we put the two English Setters in the trunk with a stick leaving a crack and some air for the prized possessions.

When we arrived at Tellus’ for my two weeks Christmas vacation from school and I saw how bleak everything was (no longer any leaves on trees and dead grass/weeds all over the fields and a dismal looking sky) I asked myself, “What have I gotten into?” No TV or telephone was available. The bird dogs seemed happy enough because they were able to run around the outside of the house and were no longer penned. A number of Blue Tick and Red Bone Herring hounds came up and made our acquaintance. “Everyone” was on friendly terms, and there was no canine fighting.

Each day we got up before daylight and Tellus usually cooked breakfast consisting of bread burned on each side in a frying pan, fried eggs and sometimes thick ham. He cooked after placing kindling in the iron stove in the kitchen detached part of the house, which was always the coldest until he lit the fire in the stove. My boxed goods were in the kitchen, and I eagerly looked them over for the hunting campaign that Tellus waged each day. Mom would later ask me, “Did you walk 10 miles each day?” and this was basically about Tellus’ goal.

The walking and hunting built me up for later basketball but kept me tired at night, so I had no trouble settling down next to the upstairs fireplace where you would be hot on the front and cold in the back. That’s when I bonded with a hunting fanatic. He would reel off one story after the other about his deer, turkey and even bear hunts. I learned all kinds of neat things such as a shotgun slug being called a “pumkin’ ball” that he was able to put up a deer’s behind (except he didn’t say behind) because he was such as good shot. Detective magazines were scattered and I perused these, which certainly later led to a career in juvenile corrections.

All in all Tellus, in spite of his criticisms such as when I didn’t get to a deer stand he described as “the swinging bush,” we developed quite a relationship. Christmas Day approached, and he showed me how to make a handheld turkey call. Then he gave me a fox horn that I had a great time practicing on with the hounds. I got so good on it I could blow a rendition of taps, and I actually entered a talent show at a Presbyterian Church Camp at Hampden Sydney College. No prize given, only raw entertainment. I thought about getting on “Hee Haw” later but never did contact Roy Clark’s family at Meherrin about this possibility.

Christmas came and went, and I continued to enjoy all of the staples and “goodies” when in the woods that Mom left in my food boxes. Tellus and I slept in a double bed that yawed to the middle in the fireplace heated room. Of course, since I was on the right side of the bed, I always slept on my left side… quite a trick for an entire night. Tellus slept nearest to the fireplace and got up whenever it needed wood.

I was even there on new years eve.Tellus said the band and dance ought to be cranking up at the old Curdsville School and just to make sure we properly celebrated, we went outside and shot our shotguns one or two times… I couldn’t shoot much because shells cost 7 cents each.

Now that I’m age 78 and still in love with the outdoors, Caryl is packing me enough provisions for two or three night stays at the Goodloe Hunt Club off Highway 60 and west of Buckingham Court House. When I sit on the rising plateau to the Blue Ridge Mountains on a clear day, I can look off in the distance and see the Willis Mountain. It’s approximately 12 miles away. Sitting and meditating on a deer stand and looking off in the distance is the height of peace and tranquility. Tree huggers beware… hunters knew about it long before you came on the scene.

Caryl won’t come spend the night with me, but maybe if I tell her there are wild women and raucous times in the lodge, she’ll show up unexpectedly. When Tellus was asked how he lived so long (he made it to age 94) he stated wild women and plenty of liquor kept him active. Maybe so, maybe not, but I do know that the love of nature and the purity of it, especially around Christmastime, kept Mom (deceased at age 96), Tellus and me going for a long time. I can’t walk very far any more due to injuries, one which mirrors Tellus’ injured ankle. He broke it at a car wreck at Zion Crossroads (of all places) and the country doctor didn’t set it back straight. Mine is just due to multiple injuries, some of which occurred in the woods.

At night, you could go out at Tellus’ and feel the spirit in a clear sky. The spirit above especially encompasses the Willis Mountain with its grandness and uniqueness all by itself away from the Blue Ridge Mountains. Mining operations for kyanite injured it somewhat, but it lives on just like those of us who have taking our knocks and continue on.

Caryl will stay young because of sports. She loves football, basketball and baseball (especially in Charlottesville at UVA). I’ve mentioned that maybe she could drop me off with my canoe near the James River on one of her Charlottesville trips and then meet me down stream after canoeing between Bent’s Creek and Wingina. Nell did it in 1990 for Jeb, our son and me, so don’t know why Caryl won’t.