The Fishin’ Pig to relocate 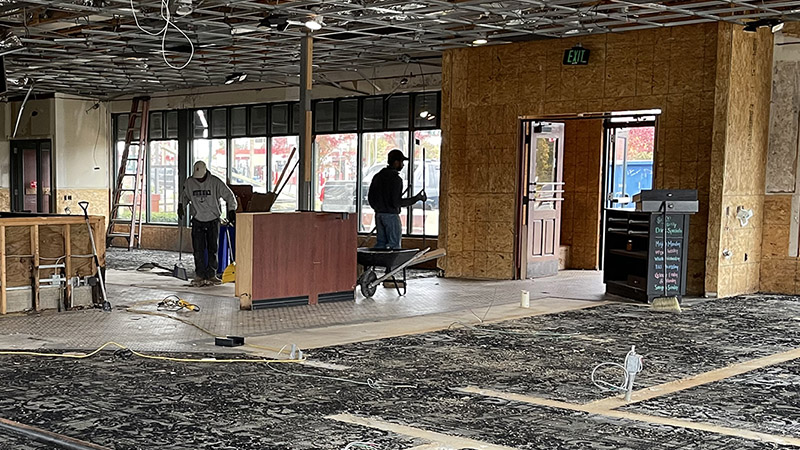 The old Ruby Tuesday building at 1807 S. Main St. is currently under extensive renovations. It will soon become home to The Fishin’ Pig’s dine-in and carryout location.

Farmville residents will soon have even easier access to barbecue, brews and more as The Fishin’ Pig prepares to leave its Kingsville location and move into the old Ruby Tuesday building at 1807 S. Main St. in Farmville.

Last week, The Fishin’ Pig owners Nash Osborn and Matt Hurley announced the rumors are true; the highly successful barbecue restaurant will be leaving its home of eight years in Kingsville in order to relocate.

In a Friday, Nov. 5, interview, Osborn said the inspiration behind the move is multifaceted, pointing primarily to the business outgrowing its current space.

Osborn noted The Fishin’ Pig’s catering business has been growing exponentially. When news came of the former Farmville Ruby Tuesday’s closure in April of last year, owners realized they were interested in purchasing the building. Once it was listed with an agent, the ball quickly got rolling.

The plan, according to Osborn, is that The Fishin’ Pig will move its dine-in and carryout services into town by renovating Ruby Tuesday’s and reopening the business there. The Kingsville building is slated to then become The Fishin’ Pig’s catering hub and event space.

Renovation on the new location will be done throughout the winter, bringing with it some exciting add-ons. Osborn noted owners hope to add a sizable patio to the location, and customers will be able to enjoy a much larger parking lot than The Pig’s previous spot.

The Kingsville building will not need many changes in order to be transformed into a catering kitchen, although some maintenance will be required.

The transition will likely be seamless — on Friday, Osborn said the restaurant may continue to operate dine-in services in Kingsville from now until the day the new location opens in Farmville.

In early June, The Fishin’ Pig opened up a brand new location in the Railroad District in Norfolk, building out of an old plumbing warehouse.

“It’s got a lot of charm,” Osborn said of the newest Fishin’ Pig, which celebrated its official grand opening Oct. 27.

On Friday, Osborn highlighted the move from Kingsville to Farmville is all about growth, emphasizing he and Hurley’s excitement for the relocation.

“Matt and I are very excited to be in this location,” he said. “We think it’s a prime location for us, and we look forward to serving everybody here.”

Statue relocation on the horizon