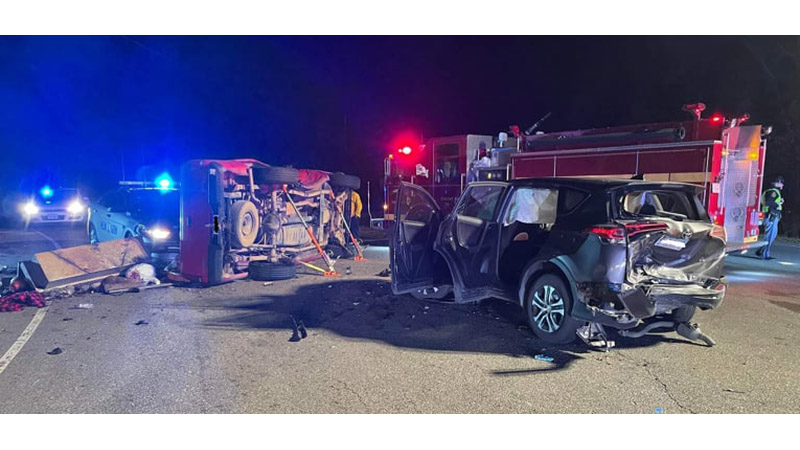 A pickup truck rolled onto the front of a state trooper’s vehicle after being struck by a Toyota Rav4 at the intersection of Route 60 and Route 45 in Cumberland on Tuesday. A fourth vehicle became involved in the accident when it swerved to avoid the crash and collided with the Toyota. (Photo courtesy of Cumberland Volunteer Fire Department)

Virginia State Police (VSP) is investigating a four-vehicle crash which occurred at the intersection of Route 60 and Route 45 in Cumberland.

According to VSP Public Relations Director Corinne Geller, at approximately 5:20 p.m. Tuesday, Nov. 23, three vehicles collided at the intersection of Route 60 and Route 45 in Cumberland County.

The original crash occurred when a 1995 GMC Sierra pickup truck, traveling east on Route 60, turned left onto Route 45 and was struck in the side by a westbound 2018 Toyota Rav4. The impact of the collision caused the pickup to overturn and land on the front of a VSP trooper’s 2018 Ford Taurus. The trooper, Geller said, had just pulled up to the intersection only moments before the crash.

After the impact, the adult female driver of the Rav4 exited her vehicle and walked around it to check on her two passengers just as a 2009 Nissan Versa traveling west on Route 60 came upon the crash. The Nissan driver swerved to avoid the Rav4 but ultimately struck the vehicle. The impact of the crash caused the Rav4 driver to be struck while outside her vehicle.

According to the Cumberland Volunteer Fire Department (CVFD), the overturned vehicle was quickly stabilized and the driver extricated.

The Rav4 driver, according to Geller, was flown to Chippenham Hospital in Richmond for treatment of serious but non-life threatening injuries. The driver of the GMC and the two passengers of the Rav4 were transported to nearby hospitals for minor injuries. The state trooper was not injured in the crash.

Crews remained on scene for approximately three hours while VSP investigated the incident.

Geller noted the crashes remain under investigation at this time, and charges are pending. The Virginia State Police Appomattox Division Crash Reconstruction Team responded to the scene to assist with the ongoing crash investigation.

This is a developing story and will be updated as more information becomes available.