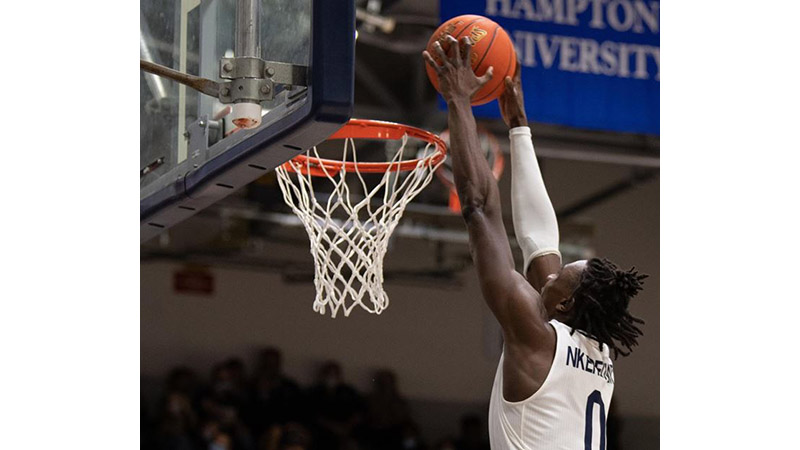 After stringing together three more standout performances in the midst of an early-season breakout, Longwood forward Leslie Nkereuwem was named Big South Player of the Week Monday by the conference office.

In three games at the Jerome Kersey Classic, the 6-7, 225-pound forward channeled the tournament’s namesake with a dynamic effort in the frontcourt in which he averaged 14.7 points, 4.7 rebounds and 1.0 steals per game to lead the Lancers to a 2-1 record. He was nearly automatic near the basket, connecting on 21-of-28 (.750) field goals while grabbing nine of his 14 rebounds on the offensive glass.

A native of Lawrenceville, Georgia, Nkereuwem came off the bench and scored in double figures in all three games, going for 15 points in an 82-42 win over American Friday, 12 in an 82-55 win over UMBC Saturday, and 17 in a 64-53 loss to Western Carolina Sunday. All three of those outings featured efficient shooting performances, as he opened the tournament going 7-for-10 from the field against American and followed with a 6-for-7 effort against UMBC and 8-for-11 against Western Carolina.

A team-high five of Nkereuwem’s 21 made field goals were dunks, with four of those coming against American. He also had at least four rebounds in every game, including three consecutive games with three offensive rebounds.

A consistent contributor off the bench throughout his Longwood career, Nkereuwem has asserted himself as one of the Big South’s top forwards through the first three weeks of the 2021-22 season. He leads the conference with a .791 (34-of-43) field goal percentage, ranks sixth with 15.0 points per game, and third with 2.6 offensive rebounds per game. He has scored in double figures in five of Longwood’s first six games after amassing eight double-digit scoring games as a sophomore in 2020-21.

After playing three games in three days at the Jerome Kersey Classic, Nkereuwem and the Lancers will get a five-day break to prepare for their next matchup, which sends them to Old Dominion for a 4 p.m. tipoff Friday.