McMakin’s 22 points were not enough 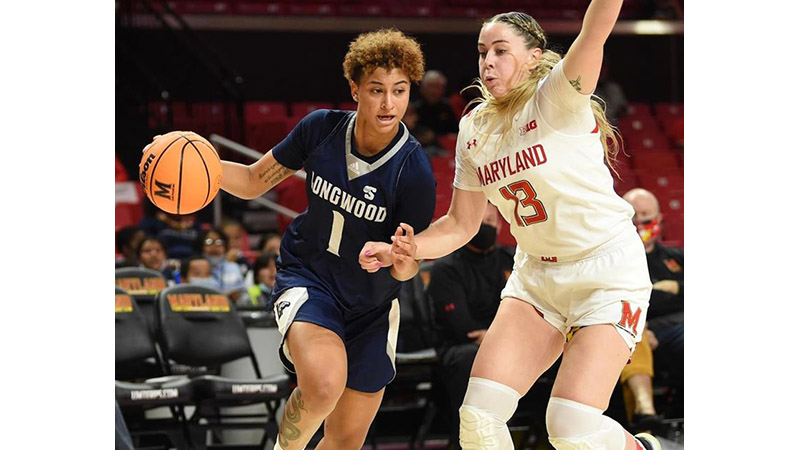 Coming off a 2020-21 season in which they won the Big Ten, went 26-3 overall and advanced to the NCAA Sweet 16, the Terrapins (1-0) produced five double-digit scorers in the season opener and overcame a game-high 22-point outburst from Longwood’s All-Big South guard and reigning Big South scoring leader Kyla McMakin.

The victory also extended an 11-game regular-season winning streak for Maryland, as well as a 23-year streak of season-opening wins dating back to 1998.

That depth showed up midway through the second quarter when the Terps, who battled Longwood (0-1) to a 21-21 deadlock at the end of the first quarter, opened up a 30-10 run that extended into the second half and gave them a double-digit lead they held on to the rest of the way. That tear saw the Terps shoot 12-of-18 from the floor and 4-of-6 from three-point range while stifling a Longwood offense that opened the game hitting 8-of-14 field goals and 3-of-5 three-pointers.

“Every coach has their own philosophy on scheduling and the way we like to do things here is that we want to be tested,” said Longwood Head Coach Rebecca Tillett, who last season led Longwood to a program-record third-place finish as well as new team benchmarks for Big South wins (12) and overall wins (14) in the Division I era.

“To come in and play a No. 4 team and be tied at the end of the first quarter, and continue to play tough in the second quarter, that showed a lot about us today. Our women are so fearless, and they played so tough and there are a lot of positives to take away from this experience. We’re going to lean on our veteran leadership with Kyla, Akila (Smith) and DayDay (Tra’Dayja Smith), and I thought those three did a great job setting the tone today, for the rest of the season.”

The double-digit scoring performances from Reese, Shyanne Sellers (17 points), Mimi Collins (16), Ashley Owusu (16) and Katie Benzan (11) were enough to offset the 21st career 20-point game by McMakin, who entered her third season as a Lancer already a 1,000-point scorer and a two-time All-Big South first-team honoree. Facing the highest-ranked opponent of her career, the Virginia Beach, Va., native played a team-high 36 minutes, shot 8-of-22 from the field and scored at least five points in every quarter.

McMakin was one of two double-digit scorers for the Lancers, joining graduate student Tra’Dayja Smith, who stuffed the stat sheet with 11 points, seven assists, a block and a steal. Reigning Big South Defensive Player of the Year Akila Smith also contributed eight points, seven rebounds, five blocks and a steal in her 26 minutes of action.

However, that production was not enough to overcome the 6-3 Reese, who spearheaded Maryland’s high-powered offense by shooting 8-of-18 from the floor and grabbing eight of her 14 boards on the offensive glass. She added a block and a steal during her team-high 31 minutes and keyed a dominant presence on the inside in which Maryland scored 46 points in the paint and 21 on second-chance opportunities.

Meanwhile, the 6-2 freshman Sellers showcased fearlessness on the offensive end, connecting on 7-of-12 shots from the field and 3-of-5 from beyond the arc.

Now with their fourth season opener under Tillett in the books, the Lancers will prepare for their 2021-22 home debut this Friday, Nov. 12, against Stony Brook in Willett Hall at noon where they went 11-3 during their third-place Big South season one year ago. That game will also be the opener of a Friday Longwood basketball doubleheader, with game two featuring the Lancer men taking on Virginia University of Lynchburg at 7 p.m.