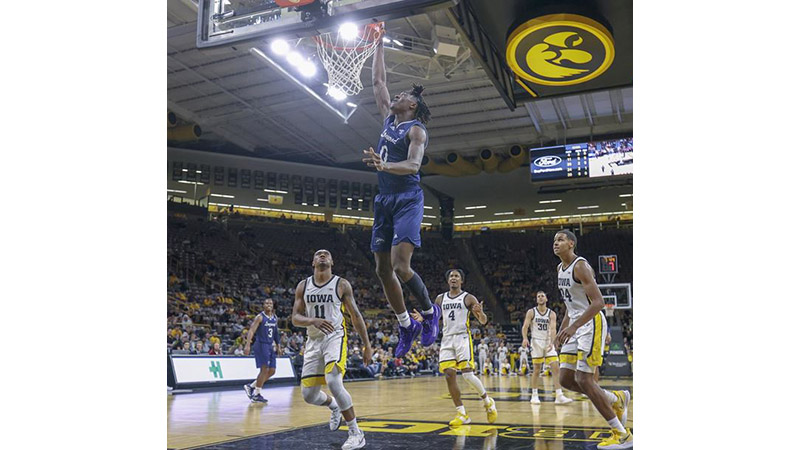 In a game that showcased the Hawkeyes (1-0) and Lancers (0-1) on national television, courtesy of the Big Ten Network, Keegan Murray led all scorers with 24 points on 8-of-10 shooting, while his fellow forward Kris – at an identical 6-8 and 225 pounds – also powered through the Lancer front court to the tune of 16 points on 7-of-9 shooting.

The interior contributions of those two in their sophomore debuts gave Iowa a 36-26 scoring advantage in the paint and spearheaded an efficient shooting night in which the Hawkeyes shot 36-of-65 (.554) from the field and 15-of-33 (.455) from three-point range. Iowa guard Jordan Bohannon was deadly from long range as well, hitting 6-of-8 three-pointers en route to 18 points in his 17 minutes of action.

The sharpshooting performance built Iowa a 24-point lead before the 10-minute mark and provided a big-enough cushion for the Hawkeyes to overcome a 19-point effort from Longwood newcomer Isaiah Wilkins and a 17-point breakout from junior forward Leslie Nkereuwem. Wilkins, a senior transfer who played at both Virginia Tech and Wake Forest, led Longwood in both points and rebounds, hitting 7-of-13 field goals and four three-pointers while also grabbing eight rebounds.

“I’m proud of how they continued to battle throughout the game,” said Longwood Head Coach Griff Aldrich, who last season led the Lancers to a record 10 Big South wins and an invitation to the College Basketball Invitational postseason tournament for the second time in three years.

“Obviously we got down in a deep hole, and they could have easily thrown in the towel, but true to their character, I thought they continued to play hard.”

Embodying that play-hard mentality throughout the night was Nkereuwem, who at 6-7 and 225 pounds held his own in the paint against Iowa’s oversized frontcourt. The junior from Lawrenceville, Ga., was a near-perfect 8-of-9 from the field in his 20 minutes off the bench and provided consistent scoring throughout, with eight points in the first half and nine in the second.

“The lesson to be learned tonight was that in the first half, I didn’t recognize our team offensively,” Aldrich said. “I don’t even know what we were doing half the time. Our shot selection was extremely poor, we went to a one-on-one game, we had guys trying to score over 6-9 guys, and we were completely out of sync.

“There were a couple stretches in the first half when we got it together, but then you saw in the second half the ball started to move around, there was a focus on driving for a teammate, making the extra pass, and we’re getting wide-open shots. We were able to score a lot more regularly. It led to a bunch of layups as well, in transition and otherwise.”

That in-game adjustment led to a narrower second half that Iowa won just 50-44, but the Lancers’ late-arriving offensive output did little to offset Iowa’s up-tempo attack. With back-to-back 50-point halves, the Hawkeyes topped the 100-point plateau for the fifth time since the start of a 2020-21 season in which they led the Big Ten and ranked sixth nationally in points per game. That explosive offense made Iowa only the third team in Longwood’s four seasons under Aldrich to score 100 points.

“Whether it was the excitement of the first game, the enthusiasm of playing on a big stage against Iowa, I thought we had too much of the mindset of ‘I’m going to make a big play’ instead of ‘I’m going to execute,’” Aldrich said. “I thought when we did execute – guys playing off two feet, pivoting around it and finding an open shooter – things worked out reasonably well. When we tried to go one-on-one, it rarely worked out.

“But the great thing is I’m not sitting here saying we couldn’t get a shot. We got great shots when we ran our offense. We just have to be consistent. This is a great teaching point tonight, and we have great kids who want to learn and get better. They’re wonderful, and they’re not selfish in thinking ‘I need points in the stat sheet.’ I think they’re talented guys who can make plays, and so they’re wanting to make plays. I want them to make plays, I just want them to do that in the flow of our offense. We saw a lot more of that in the second half.”

Now with the 2021-22 season opener in the books, the Lancers will continue their early-season non-conference gauntlet this Friday at 7 p.m. against Virginia University of Lynchburg. That game will be the nightcap of a doubleheader with the Longwood women’s basketball team and the first of the Longwood men’s team’s five consecutive home games in Willett Hall.

McMakin’s 22 points were not enough