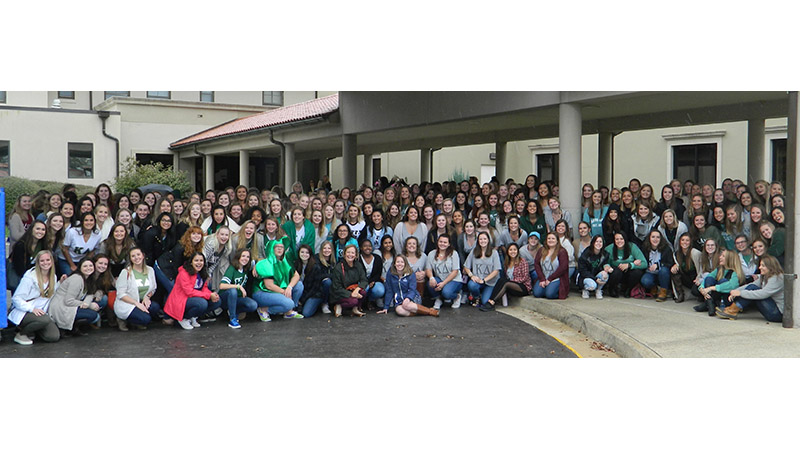 This picture is from the last sorority celebration held at the hospital’s Brook Road Campus.

Charity work has often served as an opportunity for local communities to give to larger causes in need. Sometimes different organizations join together to promote the same cause, which can eventually lead to reoccurring philanthropy traditions. Kappa Delta sorority recently reached a milestone with the Children’s Hospital of Richmond at Virginia Commonwealth University.

Stephanie Allan, vice president of community development for the Children’s Hospital Foundation, stated, “With roots going back 101 years to the incorporation of the original children’s hospital on Brook Road in 1920, we are proud to work with generous members of our community who believe there is no greater cause than providing for the health care needs of children.”

In regard to reaching this milestone in the partnership, the sorority has pledged an ongoing donation totaling $125,000 to support the Wonder Tower, the Pediatric Intensive Care Unit set to open in spring 2023. In addition, the sorority’s national foundation is also making an additional $1,200 gift to the hospital, which is the same amount as its first donation made in 1921.

To this day, the national sorority has donated over $2.2 million in finances and other charitable gifts to aid the hospital to buy medical equipment and develop the motion clinic. Every year on Oct. 23, the sorority’s Founders Day, the national foundation makes a financial donation of some kind to the hospital.

“There are not many organizations that can say they have a strong 100-year partnership,” Allan declared.

Apart from money, Kappa Delta has provided a sense of community with the Children’s Hospital of Richmond by building relationships with current sisters and alumni from all over the nation.

Melissa Hammer, the Kappa Delta Foundation associate director of communications, said, “More than anything, working with the hospital has instilled in our members the importance of improving their community and country.”

Hammer further explained that, in addition to giving money, members have hosted holiday parties and sent items such as stuffed animals, books, crayons and candy for the younger patients.

“We have wonderful friendships with Kappa Delta members and alumni, many who are still involved with our organization to fundraise, advocate and engage to support our important mission.” Allan stated, “We look forward to many more opportunities inviting Kappa Delta chapters and members to CHoR celebrating our partnership.”

In 1897, the first chapter of Kappa Delta was founded at Longwood University. Caitlyn Szalay, a Kappa Delta member from Longwood, is currently in charge of philanthropy for the Alpha chapter.

The Alpha chapter has contributed to their philanthropy by participating in the Teddy Bear Run that raises money for the hospital and has become a sorority tradition, according to Szalay. She elaborated on how the hard work for her philanthropy position pays off at the end of the day.

“Seeing not only my sisters happy but always being able to create events that lead to a great cause is like a double win,” Szalay commented. “I love being able to lead my chapter in this way and am so grateful for my sisters supporting me and the people I have gotten to work with.”

When asked what the sorority gains by working with the hospital, Szalay said, “I’ve always seen our chapter come together when it comes to philanthropy events. It also benefits us because we get time to bond with our sisters by also doing a fun event that we know goes to a good cause.”