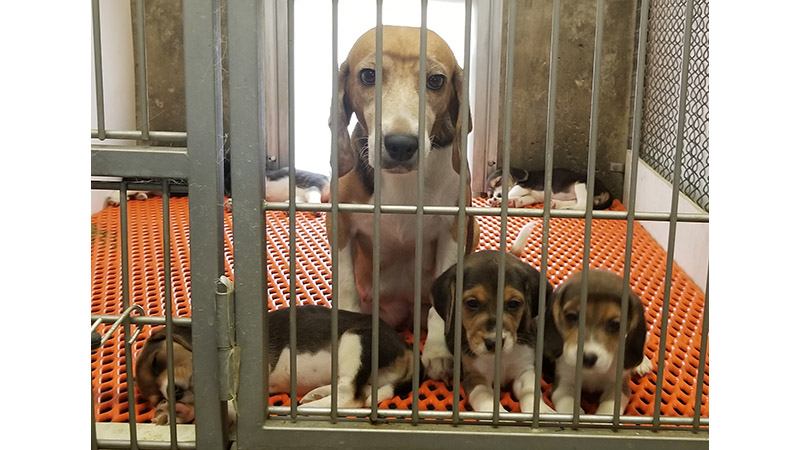 The USDA has cited the Envigo dog breeding facility in Cumberland with 26 violations of the Animal Welfare Act only a week after PETA released its own report of an undercover investigation of Envigo, the findings of which some may find disturbing. (Photo courtesy of PETA)

The Envigo research facility in Cumberland County, the largest dog-breeding facility in the state of Virginia, has once again caught the attention of state legislators following an undercover PETA investigation and a U.S. Department of Agriculture (USDA) inspection which cited the breeder for 26 violations of the federal Animal Welfare Act.

Previously operating as Covance Research Products, Envigo, one of the largest employers in the county, breeds thousands of beagles each year and supplies its animals to laboratories across the world. The facility has found itself in numerous state and national news headlines over the years due to recurring allegations of overcrowding and animal cruelty.

In early November, PETA (People for the Ethical Treatment of Animals) released the findings of a 2021 undercover investigation into the puppy-breeding facility.

The investigation, according to PETA, documented a variety of disturbing events, including untrained workers injecting euthanasia drugs directly into puppies’ hearts without sedation, nursing mothers deprived of food for up to two days, dogs sprayed with high-pressure hoses, cramped conditions and other instances of suffering. PETA’s investigator alone found more than 360 dead puppies between April and November.

Only one week after PETA’s findings were published, the USDA released three inspection reports from a federal investigation conducted back in July. The inspection resulted in 26 different citations for violations of the Animal Welfare Act.

In its report, the USDA documents similarly poor conditions at the Cumberland facility, including 13 dogs who were denied food for 42 hours, more than 450 dogs deprived of adequate space, an “overpowering ammonia and fecal odor,” insects in dogs’ food and more.

The USDA reported Envigo’s records show more than 300 puppies died at the facility from unknown causes alone between Jan. 1 and July 22 of this year. Dozens of other animals were injured in fights.

PETA’s investigation and the USDA’s inspection findings have garnered attention from across the commonwealth, including state legislators Sen. David Marsden and Sen. Bill Stanley. Both senators ventured to the Envigo facility in Cumberland Tuesday, Nov. 16.

Stanley filed a bill along with Sen. Jennifer Boysko back in 2020 to shut down the facility and prohibit any business like it in the commonwealth. The bill was unsuccessful, but Stanley went on to craft legislation which would later become law obligating Envigo and other facilities like it to adopt out dogs through Virginia releasing agencies once they had outlived their research profile.

Stanley said he and Marsden met with executives and government lobbyists on Tuesday at the facility to communicate their disgust with current operations.

“I must say that the Envigo representatives were very candid with us, and we appreciated that very much,” Stanley said. “Both of us discussed legislation that we were going to draft to correct this serious problem, and they agreed to having Virginia put in place a more stringent regulatory and oversight process for this facility.”

In 2020, lawmakers rejected an amendment offered by Virginia Governor Ralph Northam to SB 891, sponsored by Marsden. The amendment would have put more regulations on Envigo by categorizing the facility as a commercial breeder.

While the amendment was shot down, at the time, Envigo agreed to undergo additional inspections for the facility.

Daphna Nachminovich, senior vice president of cruelty investigations for PETA, said the inspection never amounted to more than an informational visit from a Virginia Department of Agriculture and Consumer Services (VDACS) representative.

Nachminovich said even after the USDA’s inspection concluded in July, PETA investigators continued to document violations at the facility.

“We documented the facility conspiring to deceive the USDA by asking employees to lie to federal officials about this incomprehensible practice they have of depriving nursing mother dogs of food for 48 hours before young puppies are taken away from their mothers,” she said.

In mid-October, PETA went to the USDA with complaints regarding the findings of the organization’s undercover investigation, prompting yet another federal inspection of the facility. Nachminovich said this inspection is ongoing, the findings of which likely won’t be public for some time. On Friday, Stanley confirmed USDA investigators were also at the facility on Nov. 16 during his visit.

“I think that it is time for Virginians to wake up to the fact that this facility is in our state, that these animals are bred so that they can be experimented on in horrible ways. Painful, excruciating experiments are performed on these dogs … is this what we want the commonwealth to produce?”

“These animals are suffering psychologically and physically, and they deserve a chance to enjoy a good life.”

For some, that life outside the facility is already beginning.

Stanley said during Tuesday’s meeting, he discussed in detail the need for Envigo to utilize the law (SB 1417) to adopt out beagles that no longer fit the company’s uses. He said at this time, the number of beagles eligible for adoption at the facility is more than 300.

Stanley himself has adopted two beagles from the facility. During a previous visit in Aug. of 2020, Stanley adopted a beagle, Marzy-Daisy, (named after Senator Marsden) from the facility. On Tuesday, he left with a three-month-old puppy the family has decided to name “Dixie.” Stanley said he paid Envigo for both dogs in exchange for the donations to go toward an outdoor play area to be built so the dogs can have time spent out of their cages.

“Envigo’s representatives agreed to work with me and our local releasing agencies to find homes for these beagles over the next two months, and I am working on an agreement between the parties that will facilitate this adoption process as we speak.”

Stanley said while he doesn’t believe the legislature is currently in a position to ban facilities like Envigo in Virginia, something must be done to prevent the “tragedy that has occurred to these beautiful dogs” in the future.

“I am drafting a robust set of legislation that will correct the problems, create proper oversight and enable these beagles to find forever homes with loving families once they have served their scientific purpose.”

More details surrounding PETA’s undercover investigation of the facility, including video footage, can be found at https://investigations. peta.org/dog-beagle-breeding-mill-envigo/. Be advised some individuals may find the video upsetting or disturbing.