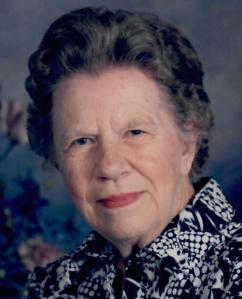 Dorothy Burruss Jones passed away on Oct. 31. She was born Aug. 14, 1921, to the late Robert L. Burruss and Annie Floyd Davidson Burruss. She was also preceded in death by her husband, Marvin S. Jones; a son-in-law, John Ervin Toney and her stepmother, Grace Putney Burruss.

Dorothy was active in the community, in the P.T.A., while her children were in school and then as a member of the Cumberland Woman’s Club. Our daddy often commented that she volunteered him for everything! She was a long-time member of Buckingham Baptist Church and taught Sunday school for over 50 years. She also taught the G.A.’s and involved them in many activities. She was active in the Woman’s Missionary Union and served as Director of the W.M.U. of the James River Baptist Association and was the first woman to serve as the Moderator of J.R.B.A.

A special thank you to the following, Charles Crawley has been “on call” 24/7 for the past 20 years, Steve Morris was also “on call” and came whenever needed, Ted Flippen and Thomas were so willing to come repair things quickly, Todd Shumaker for keeping her yard and surrounding area up to her satisfaction and Roy Watson for maintaining the farm, with a lot of advice! Also Joe and Anne Jones visited often and always brought something good to eat, especially the much-asked-for custard!

We have been blessed to have the following caregivers over the past five years, Tammy Jones, Georgie Bryant, Gloria Rainey, Sherry Dunkum, Deborah Brooks, Jill Goodwin, Kathy Peaslee, Susie Taylor, Patricia Woodfin and Jacki Selby. Sharon Jamerson has been coming almost every week for the past 6 or 7 years to fix our mom’s hair and visit with her.

Finally, we would like to thank Hospice of Virginia and the following nurses who have ministered for the past several years, Alesha, Hannah, Chrystal and Paulette.

God has been so good in providing people who have helped so much.

Funeral services will be held on Saturday, Nov. 6, at 11 a.m., in the Buckingham Baptist Church with interment in the church cemetery. The family will receive friends one hour prior to the service. In lieu of flowers, memorial contributions may be made to Buckingham Baptist Church, C/O Hill & Davis Accounting, 14303 S. James Madison Hwy, Dillwyn VA 23936