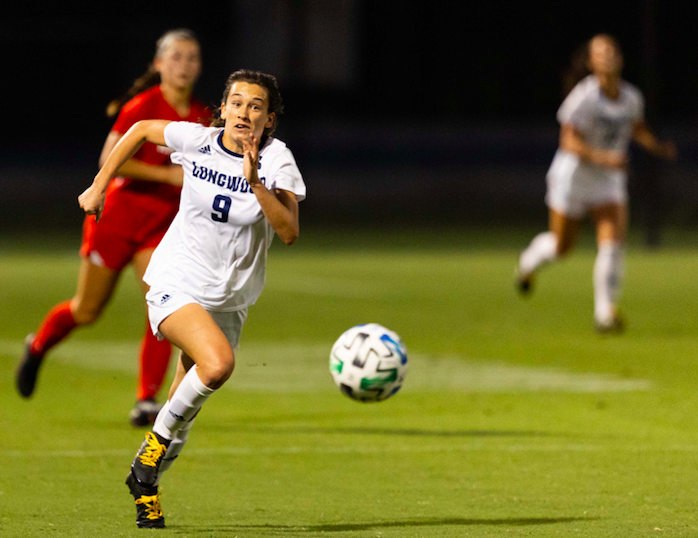 After a two-game surge in which she scored twice, dished an assist and put home the game-winner in a 3-2 road victory at Gardner-Webb, Longwood senior forward Danielle Toone was named Big South Offensive Player of the Week Monday by the conference office.

A 5-5 native of Berryville, and a three-year starter, Toone spearheaded Longwood’s offense in back-to-back one-goal road wins at Hampton and Gardner-Webb, contributing to three of Longwood’s four goals during the week. That performance helped extend the Lancers’ unbeaten streak to five games and win streak to three straight, while also vaulting Longwood (4-5-4, 3-0-2 Big South) into sole possession of second place in the Big South standings.

Toone’s award is her latest achievement in recent run of success that has now seen her earn points in three consecutive games, all of which have been Longwood victories. More than a week ago, she began that tear with an assist on the game-winning goal in a 2-1 win against Presbyterian and continued that surge into this past week’s competition. Tuesday at Hampton, she set up another teammate for a game-winner, finding fellow forward Catharine Forst for a 15th-minute go-ahead strike that ultimately stood as the difference-maker in the 1-0 win.

This past Saturday, Toone scored two goals of her own against Gardner-Webb, both of which provided momentum boosts in a back-and-forth battle that Longwood ultimately took, 3-2, in dramatic fashion. Her first goal that night tied the score at 1-1 in the 23rd minute, while her second came with just 6:01 to play in regulation and turned a 2-2 deadlock into a 3-2 Longwood lead. That score stood to the final whistle.

The big week pushed Toone to the top of Longwood’s leaderboard with eight points and matched her with Forst for the team scoring lead with three goals and Kylie Cahill and Alayna Palamar for the team assists lead with two.

Now entering their final stretch of the regular season, Toone and the Lancers were set for a four-game homestand Wednesday, Oct. 6, in a top-tier Big South clash against first-place Campbell at 4 p.m. Home games against Charleston Southern (Oct. 9), USC Upstate (Oct. 16) and High Point (Oct. 20) follow before the regular-season finale at UNC Asheville on Oct. 23.