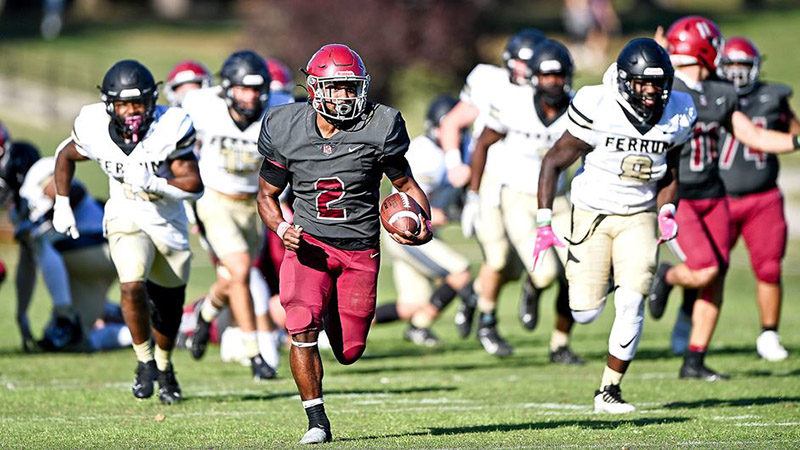 Senior running back Kaleb Smith of Rocky Mount rushed for a game-high and season-high 138 yards and three touchdowns to lead Hampden-Sydney College (H-SC) to 42-28 home football win past Ferrum College (FC) on Saturday afternoon during Homecoming on Fulton Field at Lewis C. Everett Stadium. Senior quarterback and team captain Tanner Bernard (Lynchburg) passed for 297 yards and three touchdowns, as well, in the Old Dominion Athletic Conference (ODAC) contest. The host Tigers improved to 3-4 overall, 3-1 in the ODAC, while the visiting Panthers dropped to 5-2 overall, 2-2 in the ODAC.

H-SC took the opening possession of the game and drove 75 yards on nine plays as Kaleb Smith scored the first of his three touchdowns on a one-yard run at 11:56 of the first quarter, followed by the first of six PATs from sophomore placekicker Palmer Smith of Chesapeake. Smith had 20 yards receiving and seven yards rushing on the drive, while fifth-year wide receiver and second-year team captain Dillon Costello of Haymarket had 44 yards receiving on two receptions.

The Tigers made it 14-0 when sophomore running back Josh Jones of South Hill was on the receiving end of a 46-yard touchdown pass from Bernard at 7:45, a one-play possession for the score.

FC got on the scoreboard with 1:35 left in the first quarter via an eight-yard touchdown run by Titus Jones, followed by the first of four PATs from Seth Deaton.

H-SC, however, answered right back with its third touchdown of the opening quarter-getting a 54-yard scoring toss from Bernard to sophomore wide receiver Braeden Bowling of Cary, North Carolina with just 44-seconds on the clock. It was a quick two-play strike that included a 13-yard pass from Bernard to Costello to make it 21-7 after 15 minutes.

The Panthers responded with two second-quarter touchdowns to tie it at 21-21, the first score on a two-yard pass from Jones to Daniel Lamb at 7:36, and the second score on a six-yard run to the end zone by Jones at 2:45.

The Tigers answered back late in the quarter with a six-yard touchdown run by Kaleb Smith with just 41-seconds remaining in the half. It was another quick drive covering 55 yards on nine plays, including a 16-yard pass from Bernard to Costello and a 14-yard run by Bernard … before Kaleb Smith covered the final 32 yards on the ground and the hosts led 28-21 at halftime.

FC had the only score of the third quarter courtesy of a five-yard touchdown pass from Jones to Conner Sides at 8:50, and the closely-played contest was tied at 28-28 after three quarters.

H-SC once again answered and scored the go-ahead touchdown early in the fourth quarter when Bernard found Bowling open down the middle of the field for a 79-yard scoring play at 13:54 to make it 35-28. The Tigers then came up with a huge fourth down stop on the defensive end of the field as FC had driven 73 yards on 15 plays-having a first and goal situation from the eight, before the Garnet and Grey stopped them on fourth and goal from the two-yard line with 6:53 remaining.

H-SC took over at its own two and proceeded to drive 98 yards on 11 plays, culminating with a 52-yard touchdown run by Kaleb Smith with just 1:14 on the clock-scoring on a third and two play with his rush untouched up the middle of the field to provide for the final margin. The possession featured 10 runs from Kaleb Smith covering 87 yards, while Jones had a key 11-yard reception from Bernard on a third down play to keep the drive alive.

FC took the final possession of the game and drove to the H-SC 40 before Jones was sacked by fifth-year linebacker and team captain Brendan Weinberg of Apex, North Carolina for an 11-yard loss on the final play of the game.

Weinberg and sophomore safety Will Pickren of Mt. Pleasant, South Carolina each finished with a game-high 14 tackles, including 2.5 for loss and one sack by Weinberg, and one for loss and a pass breakup by Pickren to lead the Tigers defensively. Sophomore safety James-Ryan Salvi of Troutville matched his career-high with 10 tackles for the third-straight game, including one for loss, while junior cornerback Jabril Lewis of Virginia Beach added a career-high eight tackles. Sophomore cornerback Tobias Lafayette (Charleston, SC) contributed five tackles, along with his fourth interception of the season that he returned 32 yards in the third quarter.

Jones passed for a game-high 333 yards with two touchdowns and one interception, adding 51 yards on the ground and two touchdowns for FC. Josh Ellerbe rushed for 106 yards on 24 carries. Tmahdae Penn had 90 yards receiving on seven receptions, Lamb added 55 yards receiving and one touchdown on six catches, and Sides had the one touchdown catch covering five yards. Tanner Kennedy had seven tackles to lead the Panthers.

H-SC plays at The Apprentice School in non-conference action on Saturday, Oct. 30, at 1 p.m. in Newport News.

It was Homecoming Weekend at the College, and the Athletic Department recognized the 1970 and 1971 football Tigers who played in the Knute Rockne Bowl at the conclusion of each of those seasons. At the time, the bowl game was played as the NCAA College Division (II) East Regional Championship. The 1970 Tigers finished 9-2, winning the Mason-Dixon Conference Championship with a 4-0 record, before falling to Montclair State 7-6 in the Knute Rockne Bowl on November 28, 1970 in Atlantic City, New Jersey. The 1971 Tigers finished 10-1, also winning the Mason-Dixon title with another perfect 4-0 record, before falling to Bridgeport 17-12 in the Knute Rockne Bowl on November 26, 1971-once again in Atlantic City. The teams were led by Hall of Fame head coach J. Stokeley Fulton, and defensive coordinator, and future Hall of Fame head coach at Emory & Henry, Lou Wacker. The Tigers had the top-ranked scoring defense in all NCAA divisions during those two seasons … the 1970 team yielded just 2.8 points per game during the regular season with six shutouts, and ranked third in total defense (145.0) … while the 1971 team allowed only 3.4 points per game during the regular season with four shutouts, and also ranked first in total defense (115.6).