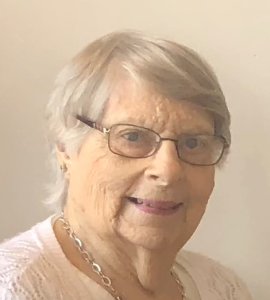 She grew up in Oceanport, New Jersey, and at age 16, she entered Gettysburg College, where she graduated in 1957 with Phi Beta Kappa honors and a degree in romance languages (French and Spanish). After graduation, she taught elementary school in the Ft. Monmouth area, where she met Edward Marion Kiess (Ed), an Army pilot, in church socials. They were married on June 27, 1959 at the Red Bank Methodist Church in Red Bank, Monmouth Co., New Jersey.

They lived near Freehold, New Jersey until 1960, when they moved to Houserville, State College, Pennsylvania, where they had 3 children: Raymond, Thomas and Sandra.

In 1966, they moved to Worthington, Ohio. In 1968, they moved to Hampden-Sydney. There, she was involved in the “Log Cabin Kindergarten” for children of color for whom Prince Edward County offered no public school Kindergarten. This proactive educational outreach was a progressive social service at the time. Later on, she became a Den Leader of a local Cub Scout Pack and a volunteer leader in the Girl Scout Troop. She was a longtime substitute teacher in the Prince Edward County public school system. For many years, she gave of herself to help others in volunteer capacities, such as helping establish a volunteer tutor and literacy program.

She balanced all these activities with raising a family.

She was very active in the Farmville United Methodist Church, particularly with the “Methodizers” fellowship and exercise group for women, and with charitable activities such as “Meals on Wheels” in which she delivered hot meals to shut-ins around Prince Edward County.

She and Ed moved to Blacksburg in Sept., where she died from complications associated with leukemia.

She is survived by her husband of 62 years; her 3 children, Raymond Kiess (Marjory) of Weaverville, North Carolina, Thomas Kiess (Leslie) of McLean and Sandra Moore of Blacksburg; 6 grandchildren and 2 great-grandchildren.

She will have a private graveside service for the immediate family on Friday, Oct. 29 in Dublin.