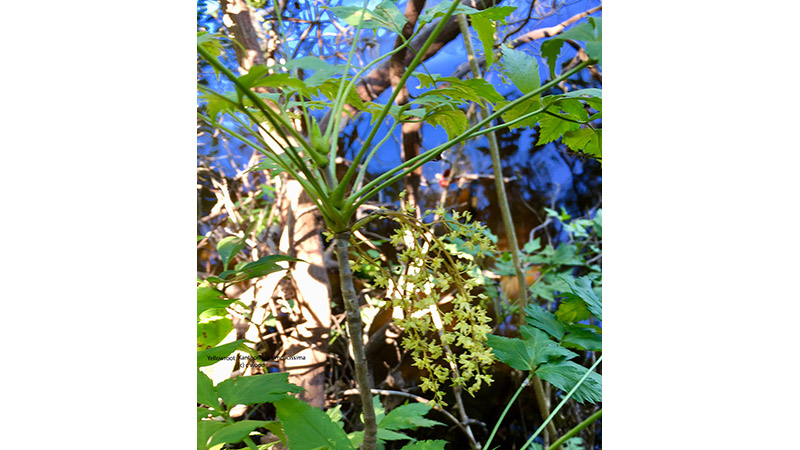 For many years, I hiked local trails with my friend Ann Mason Field. We followed the cycle of the seasons by celebrating the first skunk cabbages in late December/early January. We searched for native orchids in April and May. She always knew where to find the elusive puttyroot orchid. In early fall, often just before Halloween, we scoured the woods for beechdrops, those strange, parasitic brown plants that resemble bony hands poking up from the earth. Every time that I walked with her, I learned something new – tips for plant identification, odd bits of lore and, of course, new plants. She knew so many plants.

One of the plants that Anne Mason showed me how to identify was yellowroot (Xanthorhiza simplicissima). It’s an unassuming plant that’s so easy to walk by and never even notice. Yellowroot is a shrubby perennial that only grows several feet tall, produces a shock of unruly, celery-like leaves at the top of the stem and has racemes of star-shaped, yellowish-to-brownish flowers. Nevertheless, it has several interesting features. It’s one of only two members of the buttercup family to have woody stems. It’s also polygamous. What, you say? Yes, indeed. Yellowroot is bisexual, meaning its flowers have both male and female sexual organs, but it also has both male and female flowers all on the same plant.

In addition to being polygamous, it has yellow roots that have been used to dye fabric. Unfortunately, yellowroot produces a long-lasting, beautiful golden tint on silk, but on cotton and linen the yellow fades to olive drab when exposed to air. Not so good.

Yellowroot also contains an alkaloid compound called berberine that was once valued for medicinal purposes and was even listed in the American Materia Medica for most of the 19th century. It was used to treat digestive disorders, urinary infections, sore throats and various other ailments.

When William Bartram, that inveterate botanizer, wrote about yellowroot in 1773, he described it as “a very curious plant.” Indeed, so it is. Whenever I find it or someone asks me about yellowroot, I remember Anne Mason and her uncanny ability to spot this plant and who always thought that it deserved more recognition. I was so fortunate to have spent so many hours on the trails with Anne Mason. She was special.