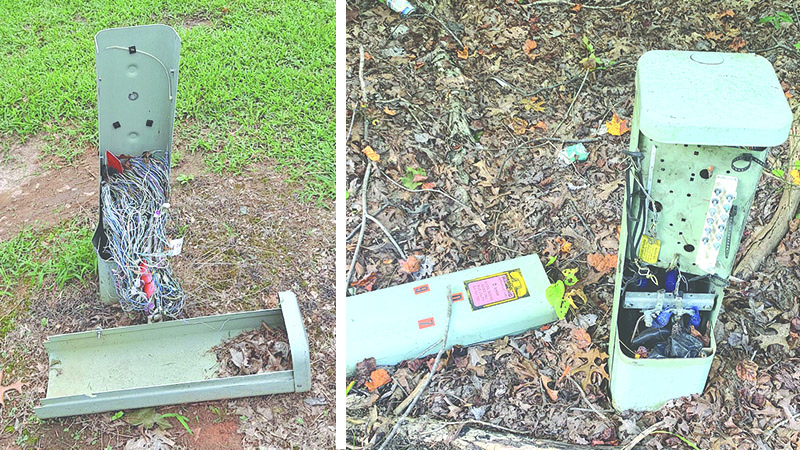 Buckingham residents and business owners are reporting telephone and internet outages across the county. Above are just two of the many telephone pedestals spotted in the county with loose or broken covers and wires exposed to the elements. The pedestal at left was spotted outside of the high school, and the box at right was located off Route 602 near Glenmore.

Locals have reported problems with obtaining a dial tone after wind or rain or sometimes even in clear weather, and some residents say they’ve experienced these issues for years.

Buckingham Board of Supervisors District 4 Supervisor and Vice Chair Thomas Jordan Miles III says he’s had numerous residents report issues with their phone and internet service. He’s now asking the state for help with the issue.

Saturday, Oct. 10, Miles said roughly 100 of his constituents and others living or operating businesses in the county have contacted him regarding outage issues, some recent and some spanning back years.

“There is no doubt that, for many years, residents and small businesses have been struggling with CenturyLink telephone and internet outages in Buckingham,” he said.

Miles noted these outages can have a big impact on local businesses.

Ben Moss, owner of Moss Tree Services, said the outages have been impacting his business for some time now.

“We’ve had issues with it for three years, and then it’ll go out for a matter of different reasons. It could be just a beautiful day outside and the phones just ain’t working,” Moss said.

Moss said phone outages have cost his business money, and more work is likely to be lost in the future due to the issue.

“We’ve lost business because of the line,” he added. “Just this past week I had another issue where calls couldn’t come in. I could call out, but couldn’t nobody call to me. The landline is an essential thing for our business. That’s how people make communication with us. So when we don’t have that, we’re kind of in the dark … We’re going to lose work because of it.”

Buckingham Resident Roberta Patterson can attest to this.

Monday, Oct. 11, Patterson said her phone line and internet connection goes out every time it rains or is windy outside. This makes education difficult for her 15-year-old daughter who participates in virtual learning from home.

“It’s not only impacting me, but it’s impacting my daughter too,” she said.

Not only are phone outages a major problem for businesses and those trying to get work done at home — for seniors or those in need of emergency services, Miles said, it’s downright dangerous.

“When an older adult who does not have a cellphone and pays their CenturyLink bill is experiencing an emergency and picks up the telephone to call their son or daughter, or to call 911 for help, and there is no dial tone, that is unacceptable,” he commented.

“Local businesses in Dillwyn and across the county have lost thousands of dollars of revenue due to this issue,” Miles said. “Residents need and deserve telephone dial tones for many reasons. Those who are on instant alert devices, pacemakers, who are in poor or struggling health, or anyone in an emergency who may not have the best cellphone reception deserve a working telephone. People pay their telephone bills for a reason, and it’s very reasonable to expect a working, dependable telephone line in 2021.”

On Saturday, Miles said he believes poor infrastructure from CenturyLink not upgrading and maintaining copper telephone lines and putting corporate interests ahead of responsibility to the public may be the main cause of this problem, adding residents and business owners from other rural counties such as Prince Edward and Cumberland have reported experiencing the same issues.

Miles noted he is in constant communication with CenturyLink regarding outages and damaged phone line pedestals which have been spotted in the county.

Last week, Miles sent a letter to the State Corporation Commission asking for help getting the county’s phone and internet issues addressed.

Miles stated on Saturday that CenturyLink needs to understand the aspect of corporate responsibility to the people of Buckingham County and rural Virginia.

“We pay our bills, and they need to fix their equipment and reinvest in their infrastructure. It’s that simple.”

The Herald reached out to Lumen, a wholly-owned affiliate of CenturyLink, for comment regarding phone and internet issues in the county.

“Our network is operating normally and is not experiencing any widespread issues,” Danielle Spears, Lumen communications representative, said. “Ensuring the reliability of our services is a priority, and we continue to work with our customers, Supervisor Miles and other local officials to address individual concerns. We encourage customers to contact us online or call us at (800) 788-3600 to resolve any individual issues as quickly as possible.”