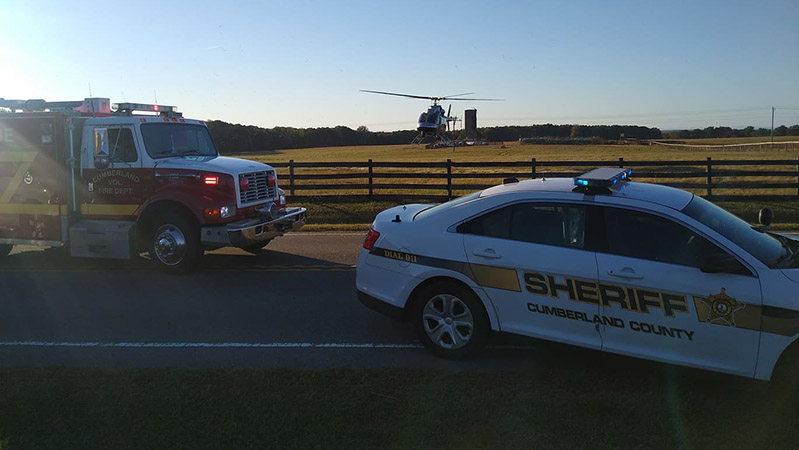 Med-Flight 1, the Cumberland Volunteer Fire Department and the Cumberland Sheriff’s Office vehicle can all be seen here responding to the car vs. UTV crash which killed a Cumberland man last Wednesday. (Photo courtesy of CVFD)

A Cumberland man succumbed to his injuries last week after a car vs. UTV crash.

According to Virginia State Police (VSP) Public Relations Coordinator Shelby Crouch, at 4:57 p.m. Wednesday, Oct. 20, VSP responded to a crash on Route 45 (Cartersville Road), about a half-mile south of Route 616.

According to VSP, a 2005 John Deer Gator driven by Odilon E. Rodriguez, 65, of Cumberland, was attempting to cross Route 45 from a private driveway when it was struck by a 2006 Chevrolet Cobalt.

Cumberland Volunteer Fire Department (CVFD) officials noted due to the severity of Rodriguez’s injuries, Med-Flight 1 was requested on scene.

Rodriguez was flown to Chippenham Hospital in Richmond where he succumbed to his injuries.

The driver of the Cobalt, Nina M. Portman, 56, of Farmville, was transported for treatment of minor injuries. She was wearing a seatbelt.

According to CVFD officials, Cartersville Road was closed in both directions while the incident was investigated. Rescue 21, Engine 24 and Utility 25 responded.