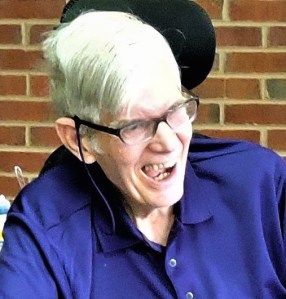 He is survived by his sister, Lyndelle Yancey Dodson (Tim Dodson) and their children, Alex and Drew Dodson.

At age 21, John was in a car accident that left him in a coma with brain stem damage. Against the odds, John awoke from the coma after nine months. Doctors gave John less than a year to live, but he went on to live a full life that profoundly impacted and enriched the lives of those around him.

The secret to John’s youthful exuberance was that his body aged, but his mind never did. He kept the mind and sense of humor of a 21-year-old because of brain damage from the car accident. As a result, John was always the life of the party everywhere he went. It wasn’t uncommon to hear uproars of laughter walking into Elizabeth Adam Crump Manor, John’s home for the last 15 years. Without fail, you would round the corner and see John at the center of it, grinning from ear to ear with a crowd gathered around.

John was the ultimate entertainer. Most who met John had the pleasure of being serenaded to “O Sole Mio” more than a few times—sometimes in the same afternoon. John’s brain damage caused him short-term memory loss, so his arsenal of one-liners and jokes remained largely the same for 50 years. Like wine, John’s jokes only got better with age.

John’s young mind also made him a notorious flirt. It wasn’t rare to see John holding court with several women or making waitresses blush with his witty jokes. This indomitable playfulness was present with John at all times, including in his final days. Nurses taking care of John at Parham Doctors’ Hospital remarked on how John’s gentle spirit and kind soul continued shining brightly to the end.

John was also fiercely resilient. Despite being confined to a wheel chair following the car accident, John worked for many years as a clerk at Wallace’s Store in New Canton, where he lived on the family farm. He retained mobility all the way into his 70s, routinely going on car rides out to lunch, family holidays and other activities with friends and family members.

Family visitation will be Thursday, Oct. 14, from 5 p.m. to 7 p.m. at Dunkum Funeral Home in Dillwyn. For those unable to attend during this time or concerned about Covid, you may drop by during the day to pay your respects. A private graveside service will be held on Friday. You can honor John by wearing something purple, his favorite color.

In lieu of flowers, the family asks that you plant a tree in honor of John’s memory. John would often say that he could breathe better in the countryside because of all the oxygen produced by trees.

The family is also collecting favorite memories and stories involving John from those who have known him. Anyone who has a memory to share should email lyndodson@msn.com or send by U.S. mail to John Memories, 190 Oakwood Ln., New Canton, VA 23123.

Don’t worry, John, we won’t do anything you wouldn’t do.