Although the win itself was exciting, students were thrilled to participate in what was actually the band’s second public performance this school year.

Scott Gordon, band director for CuCPS, has been working with Virginia students as a band director for 29 years. 2021 marks his seventh year directing and teaching at Cumberland. Gordon teaches band at CuCPS for fifth grade through high school. Students participate in winter and spring concerts, and older students have the option of participating in the after-school marching band program.

In a Friday, Oct. 15, interview, Gordon said students were thrilled to be back on the field following over a year of disrupted classes and practices due to COVID-19.

When the pandemic hit, many aspects of band at CuCPS needed to be put on hold, from prepping for concerts to performance technique. For a long time, students only met virtually, and nearly all content was intellectual as playing instruments wasn’t really an option.

When the band was able to gather in person again for hybrid learning, students were finally able to begin playing again, although there was quite a bit of catching up to do. Many kids found themselves more or less a year behind.

Gordon set out to make up for lost time and worked carefully with students to assess their individual playing levels and tailor the classroom experience to best suit individual needs. Band classes began to meet daily again, and slowly, students were able to fall back into a routine — all while maintaining COVID mitigation strategies such as social distancing and masking up when not playing or moving around the classroom — and finally, the 2021 marching season was upon them.

The pandemic dramatically reduced the number of participants in marching bands around the commonwealth, and Cumberland, too, saw a slight drop in its numbers. The Marching Dukes returned to the field with 21 students, the majority of whom are high schoolers. There are a few eight graders and some seventh graders in the band this year.

After immense hard work and dedication, students set out Saturday, Oct. 9, to show off their skills at the Midlothian Showcase of the Bands hosted by Midlothian High School.

Prior to Saturday, the Dukes had previously only performed live once this year during a home football game as the majority of the games were canceled or rescheduled.

“Our children have been able to perform publicly twice,” Gordon noted.

The kids were a little nervous Saturday afternoon, and rain threatened to push the competition indoors. But after encouragement from their band director and with Duke pride (and sunshine) on their side, students were able to make it out on the field for their performance.

After being evaluated by a panel of judges, the Marching Dukes learned they had won first place in the Class 1-A category.

While there was plenty to celebrate after the win, students were encouraged to celebrate their hard work long before playing the first note on Saturday.

“I make a point on Saturdays to be very celebratory, very casual,” Gordon said of the pre-performance mood. “We’ve done all the hard work. You’re not going to do everything right today, but it’s going to be good. It’s going to be enjoyable … Numbers don’t matter. Let’s celebrate today.”

When asked about future performances for the Marching Dukes, Gordon noted a football game scheduled for Nov. 5 will be the group’s last field show event. The band is looking forward to hopefully participating in some local Christmas parades in the winter.

While it’s taken a bit of work to get back in the swing of things, the Dukes have continued to march on under Gordon’s leadership. He looks forward to seeing the band continue to flourish and grow in numbers.

“There is not anywhere else on this earth that I’d rather be applying my career than right here, right now,” he said. 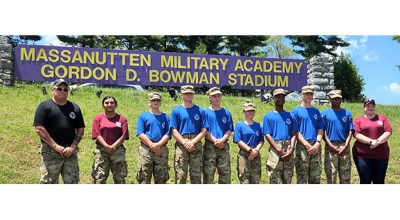