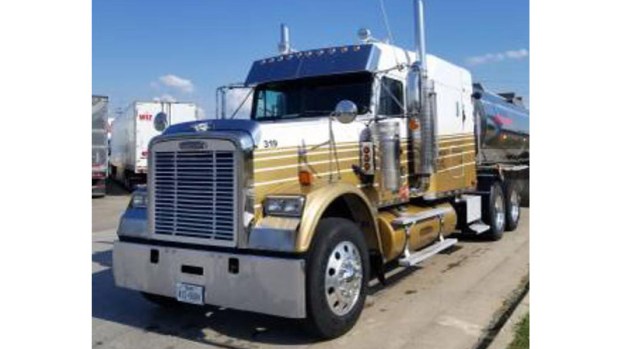 The “Golden Arrow,” Eric Cameron’s special truck, is driven by no one else — except employee LaQuan Johnson. 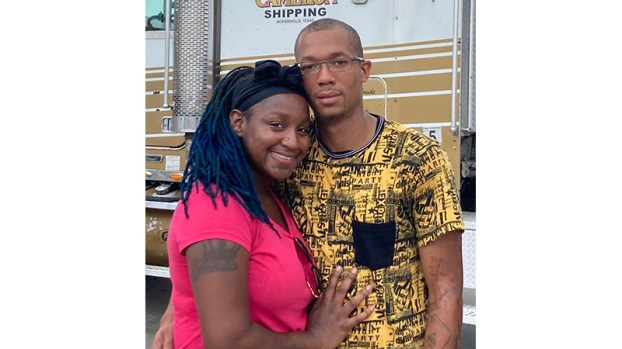 LaQuan Johnson and Marcia Turner took a truck full of supplies and donations to Houma, Louisiana to help victims of Hurricane Ida.

Long-haul driver LaQuan “School Boy” Jackson, 27, of Farmville, nicknamed with his late father’s CB handle, knows what it’s like to not have much.

So when he got the chance to help victims of Hurricane Ida in Houma, Louisiana, he jumped on it.

“It just always hit me like, if I can do for anybody, even if it’s my last, I know I want to help, without a doubt,” Jackson said. “I have mechanical skills and I’m a truck driver. If I give my last, I can always go back and make another dollar. As long as I can pay my bills, I’m good.”

His boss, Eric Cameron of Prince Edward, was going to take a tractor trailer full of supplies like water, food, medicine and clothes to Houma, Louisiana in order to help the victims of Hurricane Ida. Cameron first got inspired years ago when he saw friends of his in Houston struggling

He was bound in particular for the Cajun Navy Foundation, a relief organization that uses technology to field requests. He wanted to do it even if it killed him — and it might have.

Cameron, owner with his wife Sylvia of Texas-based Cameron & Cameron Shipping, Inc., took a cardiac stress test “to renew my CDL physical,” Cameron said. He needed a cardiac catheterization, which wasn’t available until much later after his planned trip.

“I came home and my wife and I decided that even with the risk, we would run the supplies straight down and come straight back,” Cameron said. “This decision posed a great risk to my life as there are no medical services in south Louisiana at this time should I have needed the help.”

Cameron explains how the supplies got there anyway, thanks to Jackson.

“It was at this point on Thursday last that one of our most loyal drivers and a true friend heard about what I was going to do and, well, in his words, ‘Hell no, you ain’t!’” Cameron said. “LaQuan is the only one who I will let drive my truck, the Golden Arrow. He’s a very special young man. He works extremely hard.”

The Golden Arrow is known far and wide, Cameron said, and his usual policy is that nobody but himself can touch it.

“LaQuan told my wife and I that no way was he losing me, and that he would deliver the load to Houma and stay on if needed to volunteer. I told him that I don’t get paid when I do these things, for me it’s a calling. At that point LaQuan said to my wife and I, ‘Did I ask you to pay me for it?’”

Johnson wasn’t kidding either. “He took $160 from his own pay to donate a pallet of bottled water, 84 cases, and started very quickly to organize donations in Farmville where he lives,” Cameron said. “Utilizing his mother, father and fiancée, LaQuan managed in one day to put together very large donations of food, meds and cleaning supplies and load them, as well as performing mechanical work to the trailer so that it would make the journey.”

Jackson said in particular his memories of a similar disaster in Louisiana are what spurred him on to help. “When Katrina hit, I was young then. It’s a point where you feel helpless, but you also want to do something. When (Cameron) told me about what was going on down there, and getting supplies down, it was a no-brainer for me. I could go help. I just put everything to the side and was like, ‘I gotta go do it.’”

He and his fiancée, Marcia Turner, went to Houma in a sleepless 18-hour run thinking they would unload the truck — 45 feet long and packed back to front with supplies — and then return.

They ended up staying about a week and half.

“I finally just made it back home,” Jackson said. “Nothing is a better feeling than being able to help out. We’re planning already to jump back in and go back down. Within two or three weeks we’ll be en route back down there.”

Turner, from Fluvanna County, was happy to go.

“It definitely was a nice experience, and I definitely would do it all over again,” Turner said. “I love helping people.”

Turner grew tearful when recounting the things that stood out in Houma.

“I guess just to see the hurt that they’re going through,” she said. “I’ve never experienced anything like that before, and just to go there and help out, it was amazing. It’s a feeling I can’t explain, but it’s amazing. But I would definitely do it all over again, just to see that. There’s so much need for help. I’ve always wanted to help people, so just going up there and being able to help, it’s definitely life-changing.”

Jackson said, “Nowhere down there has anything, no stores, no power. The main thing needed is water, and tents, canned foods, baby clothes, baby formula, all baby stuff, dog food, cat food. FEMA doesn’t help them down there. FEMA won’t allow them to take donations of clothes right now. We donated the trailer to them and everything.”