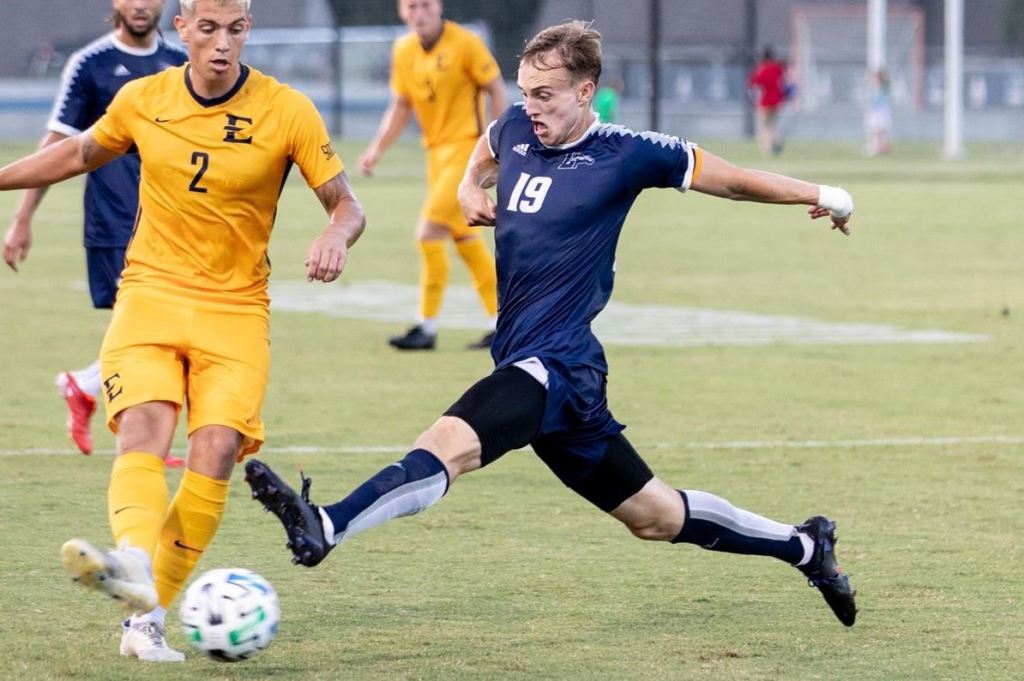 Then Lancer senior Leif VanSlyke took matters into his own hands… or feet, rather.

In a goal-scoring sequence that saw Longwood’s senior midfielder single-handedly (footedly?) beat five VMI defenders and Schull right in front of his own net, VanSlyke gave the Lancers (1-1-0) the breakthrough they needed to come out with a 1-0 win at the Longwood Athletics Complex.

VanSlyke’s goal was his first career game-winner and featured six seconds of close-quarters footwork in which he outran one defender, juked three more inside the penalty box and then punched a right-footed shot past one last defender and the goalkeeper Schull for a 1-0 lead. That goal was also VanSlyke’s third career strike against the Keydets following his two in last season’s 3-1 victory.

The breakthrough from VanSlyke punctuated a one-sided offensive effort from the Lancers, who peppered 25 shots at the Keydet goal. Schull saved five of those, while another from Markus Gronli hit the post early in the second half, but not even half of VMI’s backfield could keep VanSlyke off the board.

“Don’t get me wrong, it’s always nice to get a win, especially at home with your fans, so we will take it,” Longwood Head Coach Jon Atkinson said. “However, we made a bit of a pig’s ear of the whole night from start to finish, and we must own that, especially in the final third as a team. We have had 41 shots in two games and only one goal to show for it. That’s simply not good enough in that area, and the boys know it. It’s nice to get these chances, but we have to be more ruthless in this area to build a promising season.”

The game-winner rewarded a shutout performance from Longwood’s backline and the goalkeeping tandem of Jacob Reimers and Lucas Muller, who split the first and second halves, respectively. Those two faced only two shots on goal combined, as the Longwood backfield and midfield kept the ball in VMI territory for a large majority of the game. Senior defender Jonas Kalchner put in a marathon performance for that effort, playing all 90 minutes, while his fellow backfield mate Dan Ahrens stayed on for 72.

“We have a great bunch of lads in the program, and they know they can and must do better,” Atkinson said. “So as a coaching staff, we don’t mind the wheel spins as long as we learn from them and make a strong commitment to execute better around the field.”

The win is Longwood’s first of the season and propels the Lancers into this Saturday’s road game at Army. The Lancers will then get a game-free week to prepare for a home game against American the following Saturday, Sept. 11.