In his new role, Rushing will retain oversight of those areas while also cultivating and maintaining sponsorship agreements with Longwood athletics’ corporate sponsors and Farmville community groups.

“We are excited to announce a well-deserved promotion for Brian Rushing,” Meadows said. “In his short time in Farmville, Brian has already asserted himself as a hard-working, versatile and creative asset to our external relations team.

“Brian has plenty of experience relevant to these new duties, and he has already made an impact in cultivating community partnerships that have elevated our marketing and event operations and will also prove to be influential in expanding our corporate relations. Our entire department will benefit from his involvement, and we are excited for him to continue growing such an important aspect of our athletics department.”

Among Rushing’s major projects in his first year at Longwood were the Not-Quite Season Ticket Campaign, which raised nearly $10,000 for Longwood athletics during the 2020-21 athletics season, the university’s “HorsePower” campaign, which kicked off this fall, and the student group Lancer Creative, which also began this fall. He also produced a number of social media campaigns, including the “Timeless Performances” and “Hometown Heroes” initiatives launched over the past year. He’s also a regular play-by-play commentator for Longwood athletics on ESPN+.

“This new role offers an extraordinary opportunity to significantly impact Farmville while broadening our scope deep into the south side of Virginia,” Rushing said. “I am grateful to Michelle Meadows for giving me the chance to shepherd relationships that are mutually beneficial for everyone supporting Lancer athletics.”

A college athletics veteran whose resume also includes 19 years in minor league baseball, Rushing has held positions in marketing and broadcasting at the collegiate and professional level. Prior to Longwood, he was the director of athletics marketing and broadcasting at Belmont Abbey and founder and president of VoiceCarolinas Media Group. He is also a frequent contributor to Longwood athletics’ ESPN+ and will continue to bring the play-by-play for various sports this season. 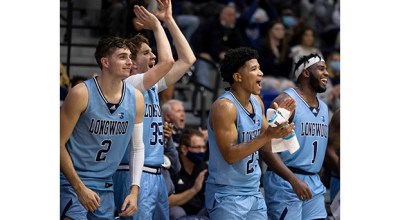