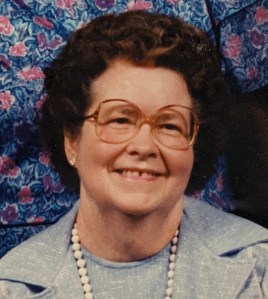 Pauline Flossie (Marker) Leatherwood McKay was born Oct. 21, 1929 in Lunenburg County. She went to her heavenly home on Sept. 23. Pauline was one of five children by Benjamin Franklin Marker and Margie Delana Caudill.

She is the mother of Joyce L. Shelton and has two stepchildren by later marriage, Tammy Miller and Sandra Covington. Pauline was married at the age of 17 to the late Herman Leatherwood. During 1955, Pauline worked for a shoe factory in Farmville. She was a caregiver for many years for people in her home. Pauline married Martin Lester McKay in 1978 (he has passed).

Pauline is preceded in death by her brothers, Paul Marker and Garnett Marker and sister, Hannah Elizabeth Cox of Wilsons.

She is survived by one brother, Winston Marker.

Pauline has three grandchildren, Jody (Gus) Hobgood, Jay (Nancy) Shelton and John (Cathie) Shelton. She has five great grandchildren, Amanda (Kyle) Sealey, Justin Shelton, Quentin Hobgood, Rachel Hobgood and Sydney Shelton. Pauline has two great great grandchildren, Adira and Celia Sealey. She has many cousins, nieces and nephews. Pauline loved to be called “Nannie” and she enjoyed cooking, gardening, painting, coloring, spending time with her family and playing with any animal she could get a hold of.

Special thanks to her caring neighbors “The Hamletts.”

A graveside service will be held on Wednesday, Sept. 29, at 2 p.m., in Trinity Memorial Gardens.