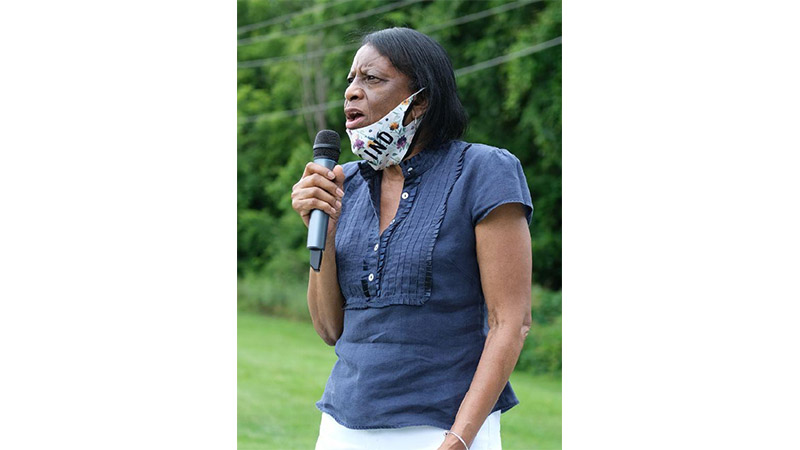 Rita Odom-Moseley was one of three former Robert Russa Moton High School students who gave an account of how they were affected by local school closings. The speeches were a part of the 2021 Juneteenth Freedom Fair in Farmville.

The 2021 Juneteenth Freedom Fair took place June 20 at Haynes Street Park in Farmville. Hosted by the SCDA, the event was a daylong event that consisted of three parts: “The Clean-Up,” “The Showcase,” and “The Field Day.”

The business showcase consisted of 23 vendors in various business industries including food, apparel, art, fitness and health services. Vendors operated as the artists performed and the program took place. The historical portion of the event highlighted the history of Moton as well as the concept of freedom as three formerly displaced students (Rev. Samuel Williams, Rita Mosely and Ardeania Ward) gave their accounts of how they were affected by the school closings as well as gave their opinion on the idea of “freedom” — the theme of the holiday. Cameron Patterson, director of the R.R. Moton Museum, presented the history of Juneteenth to the audience while local author Ryan Smith delivered an original poem and teacher/community advocate Tylic Vaughan recited a poem by Muhammad Ali. Custom shirts to mark this historical event were created by local photographer and entrepreneur Ke’Andra Jennings and worn by program facilitators.

Part three of the ‘Freedom Fair’ began with a community kickball game sponsored by The Fresh Boyz Club. Children’s activities included creating tie-dye masks and participating in a water balloon toss. Juanita Giles and the Virginia Children’s Book Festival contributed a basket full of free children’s books to the festival as well. Dr. Ylishehbah Lovelace led an Afrakan dance lesson to those interested while the DJ for the event, DJ Frank-Cola (Frank Parran), provided live music throughout the day.

Organizers, Rob Johnston and Torian Jones worked closely with the members of the community to execute this event. The theme of the event was “Uplifting. Embracing. Empowering. Together we will rise — until freedom!’