Hidden treasures in thinning a forest 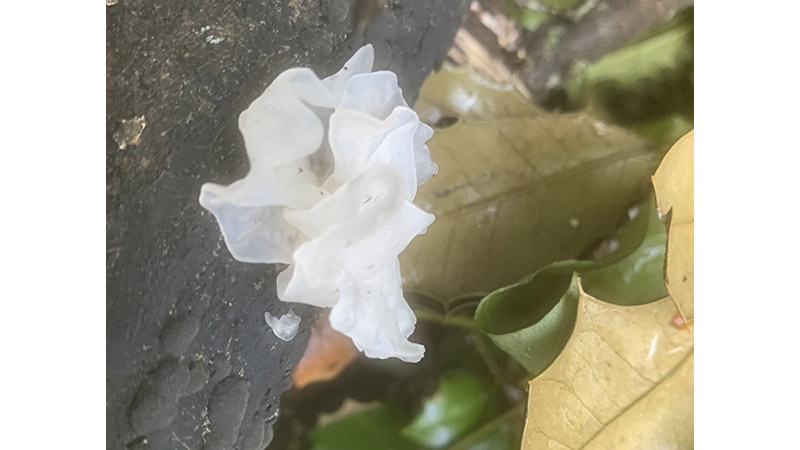 Snow fungus can look like a crumpled white tissue. It is used in some Asian cuisine. (Photo by Jo Weaver)

One of the advantages to mechanically suppressing the competition in our longleaf restoration project is that I have seen many inches of the land countless times over the years. As a result of this “eyeballing of the ground” approach, I have discovered much.

I discovered that blueberries and their relatives could live a long time in the forest without bearing fruit, and, when given adequate sunlight, blossom and fruit to their heart’s content. Then my neighbor, who is quite knowledgeable in wild edibles, flagged a bunch of our miniature pawpaws in a place we had planted longleaf pine. Over the years, I have been able to work around the pawpaws I have found on other parts of the land.

Next came the chinquapins and a number of seemingly dying/challenged trees. As a result of seeing the leaves on the challenged trees I was able to recognize them in smaller size, and we now have lots of new chinquapins ranging from calf-high to chest-high, several of which have nuts every year. There are the persimmons discovered one year and a sassafras that berries, which the birds pick clean in three days. One day, I found what looked like a crumpled white Kleenex out in the woods. It turned out to be snow fungus. It is propagated and used in some Asian cuisine. I have a couple of patches of Worley Milkweed, which I am trying to nurture. While the number of plants has increased, their flowers often disappear without setting pods.

Because I am trimming the land with essentially an 8-inch saw blade, I have lots of flexibility in what I cut and what I leave. I usually clear around clumps of prickly pear, which have such beautiful yellow flowers in the spring and purplish fruit in the fall. And of course, I save the pawpaws and the chinquapins. The other day, I saw a “new” wildflower. I developed a guideline while thinning the forest, “If I come across a plant I don’t know, I leave it until it gets big enough that I can identify it and make an informed decision.” The payoff has been delightful. The reality is, I enjoy making spaces and seeing what happens.