Groundnut: The plant with a crumpled red velvety blossom 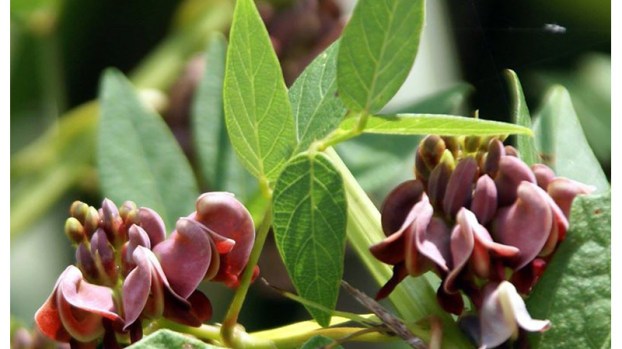 I confess that I’m often overcome by the sheer number of yellow flowers that appear in late summer. There are more than 50 species of goldenrods, all yellow with one exception. Sunflowers are almost as bad. These plants all look alike at first glance, but are very distinctive in small ways that require careful observation and checking and rechecking of details. I know because I regularly get an identification terribly wrong and then am mortified by my failure to spot the obvious differences.

So…when I find a late summer plant with pink or blue or even brown flowers, I’m elated. I can probably identify it with some degree of certainty, and it’s not yellow!

One of my favorite non yellow, late summer bloomers is the groundnut (Apios americana), a twining vine in the Legume Family that has brownish-pink flowers described by Thoreau as “crumpled, red velvety blossom(s).” This plant wanders 10 or more feet over nearby vegetation. It has light green, glabrous to finely pubescent stems above ground that exude a milky sap when crushed. The underground stem produces thick, starchy tubers ranging in size from marbles to eggs. They are the groundnuts that give Apios americana its common name. The leaves are alternate and compound.

The groundnut has showy racemes of pinkish-brown pea-type blooms that emerge from the axils of the compound leaves. The blooms have a sweet, sticky fragrance that has been compared to cough syrup. The blooms are followed by slender seedpods that eventually split and eject seeds.

Years ago, the groundnut was considered a valuable, edible natural treasure. Many groups of Native Americans regularly incorporated it into their diets. The Wampanoag told the Pilgrims about the groundnut, a food source that helped prevent them from starving during their first winter in the New World. The groundnut was regularly boiled, doused with maple syrup, and fried, as well as dried and ground into flour. Thoreau ate groundnuts during his stay on Walden Pond: “I dug some groundnuts with my hands in the railroad soil bank… They were nearly as large as hen’s eggs. I had them roasted and boiled at supper time. The skins came off readily, like a potato’s. Roasted they had an agreeable taste, very much like a common potato, though they were somewhat fibrous in texture …with a little salt, a hungry man could make a very palatable meal on them.” Later the groundnut was taken to Europe for use as a food crop, but it never became popular. In the 1980s, Frieda’s Specialty Produce tried to market groundnuts, but consumers weren’t interested. It was also used in one episode of the Iron Chef. The only place where it’s regularly grown for food is Japan.

The groundnut grows in low meadows, floodplain forests, and wet fields in partial sun to shade. You can usually find it on the Lakeshore Trail at Holliday Lake.

Like many plants, the groundnut has many common names – potato bean, Indian potato, hopniss, cinnamon vine and America-hodoino – to name just a few. Some of these overlap with the common names of other plants, thus causing major confusion. Whatever you call this plant, it’s attractive and easy to identify. A win, win at the end of the summer.