Fundraiser to be held in honor of town pup 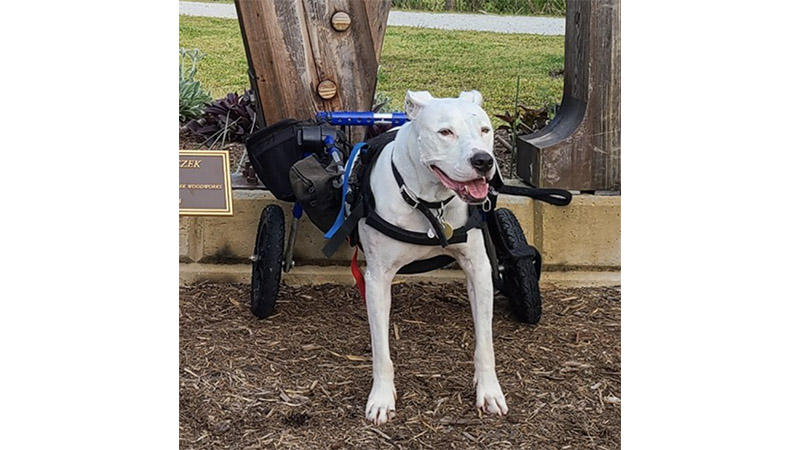 A fundraiser will be held Saturday, Sept. 11, in honor of Lago, a locally-famous dog who overcame a spinal cord injury and went on to become the unofficial town mascot of Farmville.

Humans and canines alike are invited to celebrate the life of one of Farmville’s favorite furry friends who recently crossed the rainbow bridge as part of a fundraising event for the Southside SPCA.

Lago the dog, also known as Lago di Patira, has been considered by many to be the town mascot since arriving in Farmville in 2012 with his owners Kent Wilhelmi and Audrey Sullivan, owner of the Red Door 104 art studio on Main Street. A mural of Lago, an American Bull Terrier, can be seen outside the studio.

A lover of bacon, tire chasing and his kitten friends, Lago could often be spotted in his special blue wheelchair during walks up and down Main Street or at businesses across town. According to Sullivan, Lago was adopted from the SPCA in Northern Virginia in 2008. In 2013, an accident involving a car left Lago with a spinal cord injury that caused the dog to lose function in his back legs.

Despite his injuries, Lago went on to live a happy and active life until passing away Aug. 27 of this year.

To say thank you to the community who “adopted” this special pup and to celebrate his life, Lago’s owners have planned a special fundraiser in his honor for Saturday, Sept. 11, at 3 Roads Brewing Company in Farmville.

As part of the event, scheduled for 3-6 p.m., guests are asked to bring dog food or monetary donations for the Southside SPCA.

Sullivan noted Lago’s portrait will remain up at Red Door 104, watching over the town.

“Kent and I would both like to thank everyone in the Farmville community for loving him and showing him such kindness over the years,” she said. “It meant everything to us that people accepted him in all his silly glory.”

119b gets a facelift