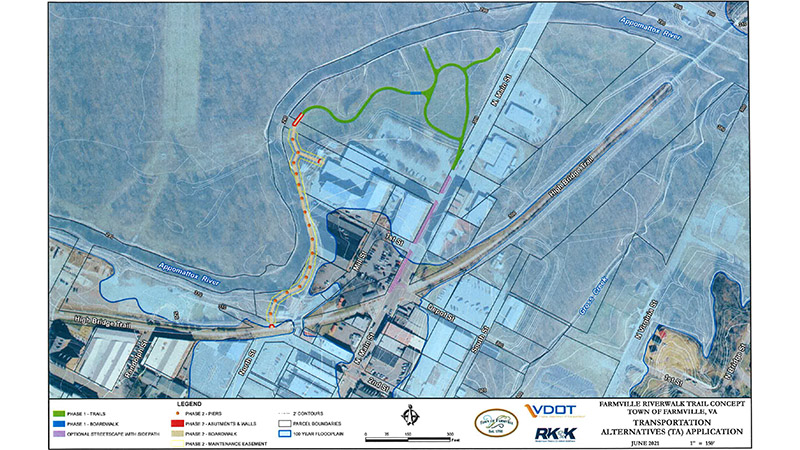 The River Walk Project map shows where the proposed trail for walkers and bikers will go, along with a later addition.

The previously shelved River Walk project is back on track, as the Farmville Town Council voted to allow Town Manager Scott Davis to apply for funds and execute project administration agreements as well as other documents necessary for approved projects.

The River Walk project was first raised as a possibility two years ago, Davis said, but VDOT did not believe the cost estimate was accurate, and the council did not go forward at the time.

However, in the meantime, town staff have worked with VDOT and the RK&K engineering firm to bring back a more complete project design with more accurate figures.

“We walked from Highbridge Trail down all the way to Riverside Park into Main Street looking at this project,” Davis said.

Phase I of the project is a trail for pedestrians and bikers. “If you notice, it creates a nice, walkable path that someone could do circular walking on if they’re trying to do laps. And then it branches off underneath the bridge of Main Street where it could connect at a later time to another trail that takes it further along the river,” Davis said.

Construction would start in 2026 and be completed in 2028, Davis said.

A raised boardwalk area would be Phase II.

In the past, the first phase of the project was going to be a boardwalk near the river. As for the change, Davis pointed out that doing anything close to the water “would drive the cost up of the project. Anytime you get closer and you have wetlands involved, and some other factors, that cost rises.”

The cost to the town itself would only be 20% of the projected $1,828,905, according to Davis. “The other 80% is funded by federal and state funds,” he said. “The resolution before you tonight is just authorization, and your support of moving forward with the grant application, seeking funding for the project.”

The grant that the town is applying for is only available every two years, “so two years from now you can put in for phase two, which would then potentially be funded in 2030 and finished in ‘32, I’m estimating,” Davis said.