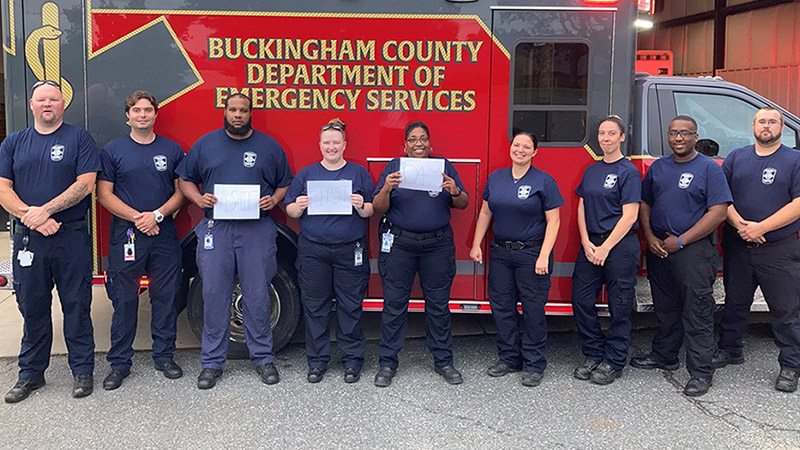 All Buckingham County EMS personnel are now county employees. Several new staff members were brought on as a result of the transition, which began Sept. 1. Above, from left, Adam Cliborne, Austin Marsilia, Joshua Toliver, Ashlee Todt, Jacqueline Hamlett, Sarah Hallman, Sara McConville, Traquan Gregory and Brett Gormus pose for a picture before starting the first shift of this new era.

Buckingham has seen a busy last year when it comes to EMS changes. In 2020, the Buckingham Volunteer Rescue Squad transferred control of the county’s emergency medical services over to the Buckingham County Emergency Services Department after almost 50 years of operations following a national decline in volunteerism.

The transition went smoothly, and in May of 2021, the Buckingham Board of Supervisors approved a recommendation by the county’s Rescue Squad Committee to consider moving forward with plans for a completely county-managed EMS staff.

The county continued to contract with DRT during the rescue squad transition last year, but with other counties in central Virginia also making the move to establish a county-managed EMS system, leaving the field more competitive and EMS personnel in short supply, Buckingham sought to get its name in the hat.

In May, Buckingham Department of Emergency Services Chief Cody Davis noted several new hires would need to be brought on board before Sept. 1, the date officials planned to begin staffing all EMS units with county employees.

In a Thursday, Sept. 16, interview, Davis said the first few weeks of this transition have gone well.

The county, he said, continues to staff two 24/7 medic-level ambulances, one stationed in Dillwyn and one in Glenmore. Buckingham’s Glenmore Station, which has undergone extensive renovation and expansion, reopened its doors Wednesday, Sept. 22.

In addition to this, the county also has a 12-hour basic life support ambulance running Monday through Friday out of Dillwyn.

Davis said following the Sept. 1 transition, the county is currently fully staffed with 32 paid employees and three active volunteers with the agency. Of the paid employees, 11 are part-time and 21 are full-time.

“Our first two weeks have gone very well,” Davis stated Sept. 16. “We were very fortunate in gaining very high-caliber staff that perform very efficiently together already. We have been very busy and have had a high number of high-acuity calls in which our staff have rendered aggressive and life-saving interventions.”

Davis said there are many new initiatives on the horizon for the Buckingham County Department of Emergency Services, and the Sept. 1 county employee transition isn’t the only recent change to the department.

As part of the department’s rapid growth and development, a new Emergency Management Coordinator, Ryanne Holland, was brought on in August.

On Thursday, Davis highlighted that the health care system is currently being stressed both regionally and nationally during the pandemic, meaning EMS agencies are running constantly and many hospitals are overrun.

“Please utilize the system for true medical emergencies only,” he advised.

In the wake of a very busy year for Buckingham’s emergency response, Davis thanked county officials and citizens for their help in making these recent transitions as smooth as possible.

“As always, I am eternally grateful to the people of Buckingham County, the Board of Supervisors, county administrator and county attorney for all of their support and assistance during this transition,” he said.