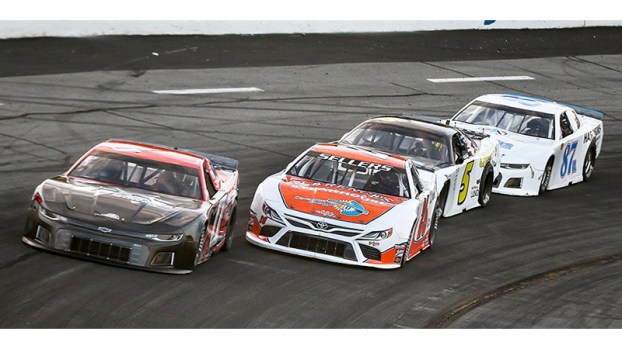 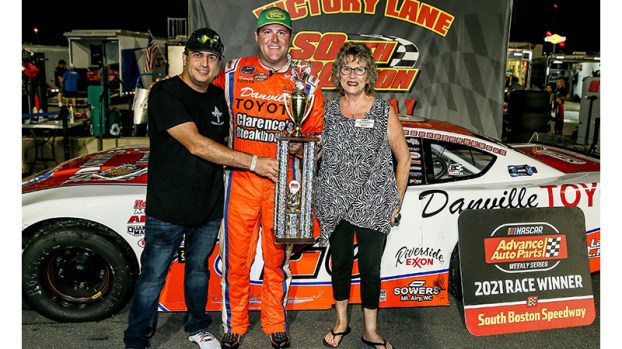 “Honestly, anybody could have driven this car tonight,” Sellers said after scoring his third win in a row and his eighth win this season at South Boston Speedway.

“It was on rails. The first race the car was a handful. It was loose, it was sideways, but everybody else was too. To come back and make some adjustments to the car and be so good at the end of the second race is hats off to H.C. (his brother and crew chief H.C. Sellers) and all of the guys on my team.”

The Ringgold resident started third in the opening 75-lap race and muscled his way past leader Landon Pembelton of Amelia on the 27th circuit to take the lead. Once in front, Sellers stayed in command the rest of the way, edging runner-up Mike Looney of Catawba by 1.185 seconds.

Despite having to start the second race at midfield in 11th position as a result of having won two races in a row, Sellers was able to get to the front of the field just as quickly as he did in the first race.

Deftly picking up positions, Sellers worked his way around Crews on the 20th lap to take the lead. As was the case in the opener, once he got in front, Sellers never relinquished the lead.

Jason Myers of Hurt had not won a Limited Sportsman Division race until he swept a twin-race event at South Boston Speedway August 7. Saturday night, he made it three wins in a row.

Myers took the win the hard way, electing to start at the rear of the 13-car field in an attempt to collect extra points toward the track’s Limited Sportsman Division title and driving to the front to score his third career victory.

“I knew we had a good car,” Myers said. “I also knew it was going to be tough. As you come up through the field, the cars get harder and harder to pass. Luckily there was a caution that bunched us back up and I was able to pick off a few cars quickly. I got an opportunity when I needed it.”

Myers said the three wins in a row is a family milestone, and one he hopes to break.

“My dad (former South Boston Speedway Limited Sportsman Division champion Billy Myers of Hurt) told me before I came to the track the most races he has won consecutively is three in a row,” Myers said. “I at least have tied him, now I want to try to beat him.”

He took the lead from Daniel Crews of Long Island with 11 laps to go and held on to edge Crews by 0.599-second for the win. Daniel Moss of Danville finished third, Drew Dawson of Nathalie, took fourth place and J.D. Eversole of North Chesterfield finished fifth.

The race was a highly competitive one, with the lead changing hands three times among four drivers.

The race was slowed by two caution periods.

Scott Phillips of Halifax broke a lengthy win drought Saturday, starting on the pole and scoring a flag-to-flag win in the first of a pair of 15-lap Budweiser Pure Stock Division races.

Crews started third in the second race, grabbed the lead on the opening lap and scored a flag-to-flag win. The win was Crews’ 10th win in 12 starts at South Boston Speedway this season.

Dawson started at the rear of the field, sped past pole starter Jason DeCarlo of Chase City to take the lead with two laps to go and held on to win the 15-lap Budweiser Hornets Division race.

The win was the seventh victory for Dawson in his nine starts at South Boston Speedway this season.

The track’s four division champions will be crowned during the event.