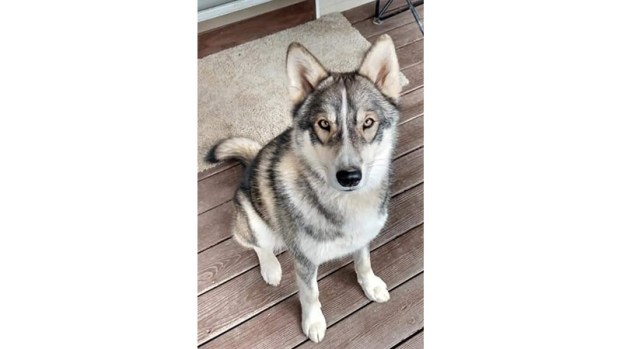 A Facebook page created in 2014 has helped numerous local pets find their way back to their families, including Odin of Cumberland County. 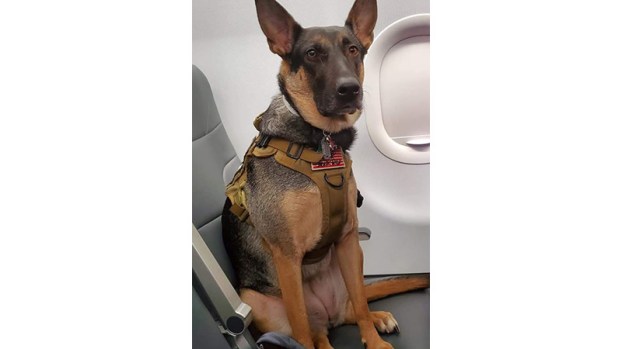 A Facebook page created in 2014 has helped numerous local pets find their way back to their families, including Femshep of Cumberland County. 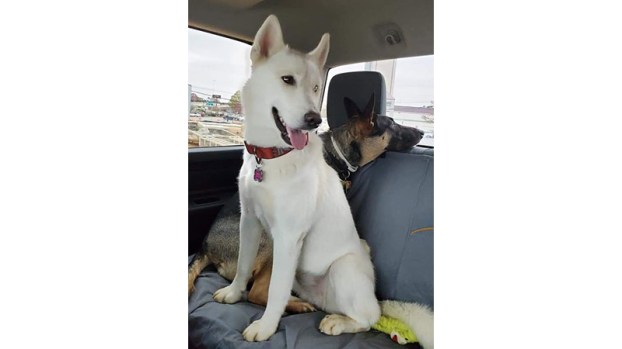 Sherry Rockhill recommends leaving a dog’s bedding or a cat’s litter box outside if the pet is lost in order to lure it back home with a familiar scent. From left are Rayne and Freya, a husky mix and a shepherd hybrid which have made it home thanks to the Farmville Area Lost Pets Facebook group. 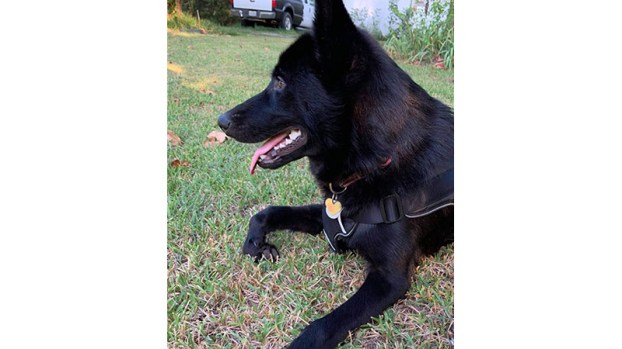 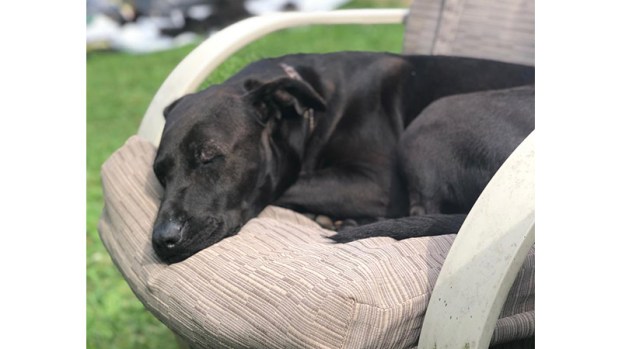 A social media group with more than 2,000 members has become a beacon of hope for residents in search of a lost pet.

The Farmville Area Lost Pets (VA) Facebook page has helped countless citizens of Farmville and nearby localities locate their lost animals or reunite found pets with their owners. The group has touched the lives of hundreds of area residents and their furry friends.

Sherry Wombough Rockhill, a Prince Edward County resident and administrator of the group’s Facebook page, moved to Virginia in 1990. Previously, Rockhill volunteered at the Monmouth County SPCA in New Jersey starting at just 9 years of old.

“I would get off the bus there and help clean cages and feed and walk the animals,” she said during a Tuesday, Aug. 3 interview.

Although she now runs the page, Rockhill was not the group’s founder. The Farmville Area Lost Pets group, she noted, was created by a woman named Mary Smith Black in December of 2014. Black started the page after her niece’s cat went missing and she realized there was no local social media group to help find missing animals.

“From starting a page for a lost cat, we now have over 2,000 members,” Rockhill said.

For more than six years, locals have been utilizing Farmville Area Lost Pets to post about lost animals or connect with the owners of some pets found on the loose. Rockhill also uses the page to post public service announcements and safety reminders about caring for animals and keeping pets safe from extreme weather, fireworks, etc.

The page is monitored by local animal control authorities who check in and offer tips on some cases, and the group does maintain rules which are in place to protect found pets, such as the barring of selling or giving away animals on the page. If a dog or cat is found and is in need of help finding a new home after a stray hold period has ended, the page will allow a post to help find the animal a new owner.

Rockhill stays in touch with Prince Edward County Animal Control and drives to the shelter nearly every day to check on the animals there. She also works to post messages on various shelter and animal control pages to find owners of found pets.

The page has had numerous success stories over the years.

Page member Samantha Johnson said her grandmother’s dog, a 6-year-old pit bull/lab mix named Hunter, was missing out of Green Bay from December of 2020 until March of this year after walking too far up the road and getting lost.

Johnson said she woke up from a nap one day to find someone had posted a picture of Hunter on the Farmville Area Lost Pets page.

“I thought I was dreaming,” she exclaimed. “We took Hunter to Grandma’s house that night. She was so amazed and happy.”

“I found out about the Facebook page a couple years ago from a friend and have seen so many fur babies reunited with their families,” Johnson added.

Erica Bryant, a Cumberland County resident, said her chocolate lab, Hershey, ran off while being dogsat by relatives in Farmville.

After being a member of the Farmville Area Lost Pets page since 2019 and seeing others find success using the group’s help, the page was the first place Bryant turned to.

After a week, she received a notification Hershey was found in the Green Bay area.

“I would’ve never thought to expand my search for him that far away from where he went missing,” she said. “I always share the page’s posts in hopes others can be reunited with their lost pets like I was.”

Stephen Morgeson Jr., also of Cumberland County, has utilized the page not only to find his own lost animals but also to locate the owners of pets he’s found on the loose. He said his dogs, husky hybrid Odin, 3-year-old husky mix Rayne, 6-year-old shepherd cattle dog mix Femshep and shepherd hybrid Freya, have a tendency of getting outside the fence.

Prince Edward resident Kimberly Waddell’s three dogs, Maya, Diesel and Chronic, went missing several years ago after wandering off the property together. She said someone spotted the dogs and shared a photo on the Facebook page. The post was shared across the site, and Waddell was able to track her fur babies down four days after they wint missing based on their last known location.

“They were happy as ever,” she commented. “I don’t know how to thank people enough. Dogs are not dogs. They are family.”

Rockhill, an animal lover, said she personally goes out looking for animals that are listed as missing and works with caught strays in hopes of reuniting the animals with their family.

While the page is filled with success stories, it also plays an important role in helping provide closure to individuals whose furry friends will not ever return home.

“Unfortunately, not all owners are found and not all animals survive their adventures away from home,” she said.

Rockhill said page members often stop when they see a deceased animal to check the collar and contact local authorities to check the animal for a microchip. Members also notify others on the Facebook page about the animal’s passing.

“Because of this, families are able to have closure knowing what happened to their pet,” she said.

Rockhill, who currently has an 11-pound dachshund, Squirt, who believes she is actually a 100-pound pit bull, has found a rewarding way to serve her community by helping run the page. Her work has also made for some interesting tales.

“My most memorable story is of a stray, adult female pit bull that it took me four and a half months to catch,” she recalled. “We tracked her via our page from Giles Road out on Route 307 in Rice and eventually caught her with the use of a humane trap behind Shorter Funeral Home in Farmville by Walmart. She went to the Prince Edward County Animal Control shelter and waited out her stray hold there. Then Richmond SPCA came to the shelter to pull some dogs to take to the shelter to put up for adoption, and she was one of them.

“Shortly after arriving at Richmond SPCA, she was adopted by a family that also adopted a black and white kitten the same day. They posted a video of her playing with the kitten in her new home with her tail wagging a mile a minute, so happy and relaxed. I have to admit I cried so many happy tears watching that video.”

Rockhill followed up Tuesday’s interview with some friendly tips for those who lose a pet in the area.

“Contact animal control and all animal shelters and vets in your county as well as any bordering counties,” she advised. “It doesn’t matter if your pet has only been missing for a few hours. Animals can travel long distances, and also, someone may pick them up.”

If you’ve lost a pet, Rockhill said, it’s a good idea to leave out unwashed clothes that have your scent on them as well as any bedding the animal sleeps on or, if you’ve lost a cat, their litter box. The scent of the familiar object can lure a pet back home.

If your pet has a microchip, it’s important to contact the chip company and make sure your pet’s registration is up to date with current phone numbers and contact information.

Those who’ve lost a pet should consider printing out fliers with information on the pet, including pictures of the lost animal. Websites pawboost.com and lostmydoggie.com have free services which pet owners can use, including making and sending out fliers to get the word out about missing pets.

“Once you print out the fliers, make sure to get them out to as many places as possible,” Rockhill recommended. “Post them at road intersections, gas stations, pet shops, vets, animal shelters, grocery stores — anywhere that will allow you to post them. Also, put a flyer in the mailbox for your mail carrier because they are out and about all day and in your area.”

“God forbid your pet were to be hit and killed, they would be the ones that would pick them up, and they could notify you.”

Rockhill also advised if you have children in school to ask them to give a flier to the school bus driver who could post the flier in the bus yard office so all bus drivers can see the missing animal’s photo.