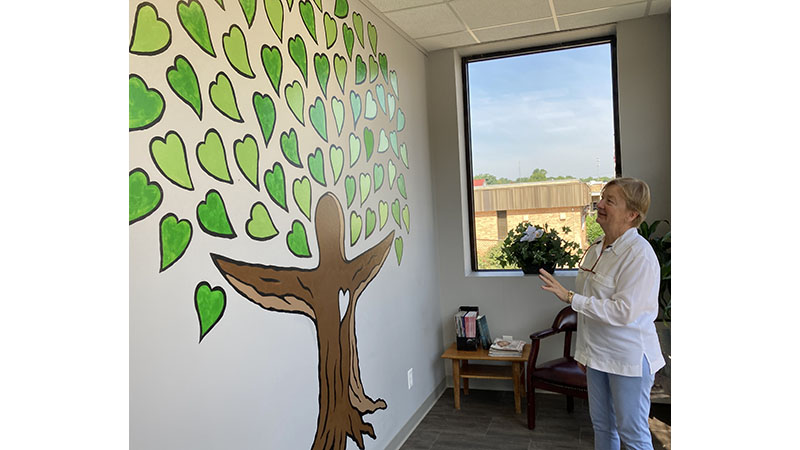 Cricket Edmonson is the artist painting a mural of a tree in the lobby area of the Heart of Virginia Free Clinic. Clinic Director Pat Payne, pictured, said memorial donors will each get a leaf on the tree. The anonymous donor who paid for the group’s home on East Third Street will paint the red heart in the center of the tree.

A church sermon, a need found in an unlikely contingent of patients and networking with people in the community who could help make a difference led Pat Payne to begin Farmville’s Heart of Virginia Free Clinic nearly 10 years ago.

“I went to church Sunday and my preacher was standing there and said, ‘If you know the solution to something and you know a group of people that need to have the problem (solved), then that’s God telling you something,” Payne, the director of Farmville’s free clinic, said.

The sermon came after Payne, a lifelong health care worker, decided to slow down a bit by moving away from 17 years of 12-hour shifts as an ER nurse and work at Home Health where she supervised nurses aides.

She told the story of one of her workers who had been suffering from headaches due to high blood pressure, but had no money to buy the medicine to control the condition.

“I went home and it just tortured me,” she said of the problem. “Here’s all these nurses aides right under my nose that need this, and they don’t have insurance, and they spend their life taking care of people, and they can’t get medicine because they can’t afford to go to the doctor, and I just said, ‘This is it, we are going to start a free clinic.’”

Payne said she leaned over to her friend Carolyn Whitmore in church and whispered, “I’m going to start a free clinic.”

That began Payne’s quest to find the solution to help those who fall outside the bounds of the health care system.

“We started out with my briefcase and some ideas, and we had nothing,” Payne said. “Now we have this building, and we have an endowment fund, and we’ve had over 500 patients. We’ve given away over $1 million worth of medicine.”

The process began with a town meeting to discuss the possibility. Payne said 33 people came to the meeting the week before Christmas in 2009 and got the ball rolling.

Payne received a manual from the free clinic director in Roanoke entitled, “How to Start A Free Clinic.” The book helped get the process started to make the clinic a reality.

An auction of donated items brought in $11,000 as seed money for the organization.

“Some Mennonites came and brought pies and cakes and cookies, and then somebody donated a trip to Disney World. We had everything from antique furniture to a bushel of apples,” Payne said.

The clinic began at the corner of South Main and Third Street in a building owned by New Life Church. The Brew House is located there now. To get its first patients, Payne placed an ad in the newspaper asking for patients to come see if they were eligible for services. Seventeen people were given appointments and were seen April 4, 2012. The clinic hasn’t stopped since.

“It just snowballed from there,” Payne said while telling the story of the clinic.

Payne had some exposure to a free clinic early in her career. She volunteered at a free clinic in Lynchburg when she was in nursing school.

“It was great. It was the basement of this old church, and there were shower curtains separating the exam rooms, and over in the corner was a dental chair,” she said. “There was a line of people to get medicine and see a doctor.”

A breast cancer survivor herself, Payne worked with the Susan K. Komen Foundation to provide funding for free mammograms at the clinic.

“I became a ninja about the subject because if I had not had a mammogram, I may not be alive today,” she said. More than 400 people have received mammograms from the free clinic. This year, 39 more patients will receive the free screenings.

The clinic has benefitted greatly from the generosity of the community.

The donations from citizens and drug companies means the free clinic has only had to buy insulin once in nine years and has never bought an insulin needle.

Centra Health gave the free clinic a grant that was used to initially open their pharmacy.

Susan Lawman has been volunteering as the pharmacist for the clinic since it began.

“She’s a saint,” Payne said. “You have no idea of the stuff she does for people. Her heart is tremendous, and she has been real good to us.”

After relocating to a former doctor’s office on South Main near Walmart, the clinic decided to move to its current location after a motorist had a seizure and ran into the building.

“That’s when we decided we were going to move,” Payne said. The clinic also needed more room as it continued to grow.

The current building at 401 East Third Street began as a Nehi bottling company. It has been a plumbing supply store, a beauty salon and a church.

“I just fell in love. I thought this is a great location.” Payne said. “This was in rough shape but I just thought the layout was really good and I saw potential.”

“The board knew I wanted this building real bad,” Payne said. “They all thought I was crazy because this building needed a whole lot of work, but it was a good location and was the least expensive we could find.”

While working to gather the funds to purchase the property from multiple sources, Payne got a call from the bank to come sign the paperwork to purchase the building. She explained she didn’t have the funds together yet, but the person insisted she come to the bank anyway. That’s when she learned an anonymous donor she had met nine years before during a talk about the clinic at a church had come through with the money.

“Nine years later, she found out we wanted this building, and she bought it,” Payne said.

A surprise $100,000 estate bequest allowed the clinic to pay for renovations to the building and begin its endowment.

That has been the story of Farmville’s free clinic throughout its decade of service.

“It’s amazing how when we need something, it just happens,” Payne said.

Board member John Watson said the free clinic functions with the support of everyone in the community helping provide for its needs and keep it going.

Typically the clinic, one of 57 in Virginia, sees patients suffering from high blood pressure and diabetes. Payne’s goal is to use the clinic’s resources to keep as many people healthy as possible.

“I’m a typical bleeding heart,” Payne said. “I just love sick people, and I want to help them. I want to do anything to get somebody well.”