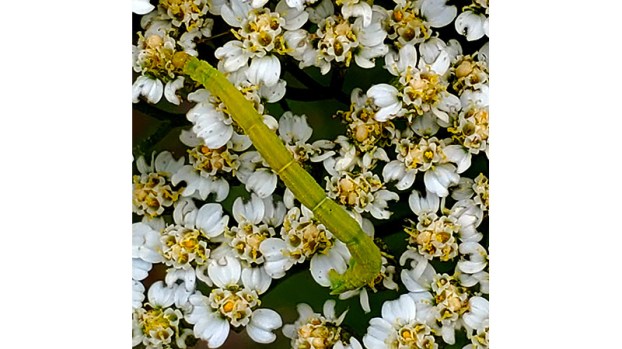 Common yarrow is a nearly indestructible native plant that works well in the home garden as long as the gardener isn’t too concerned about a tidy growth habit. 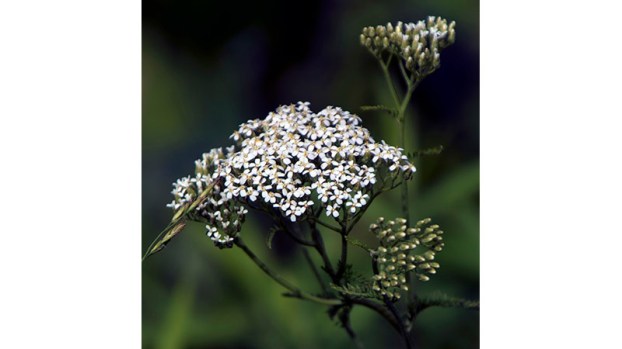 When I hiked the High Bridge Trail recently, I found myself surrounded by a sea of green.

It’s that time of the year when the great green out happens. The trees are fully covered with leaves and the canopy overhead is dense, so there aren’t many plants blooming on the forest floor. Along the edges of the trail, however, where there is a mix of sun and shade, there were patches of white. Common yarrow (Achillea borealis, formerly millefolium), also known as gordaldo, nosebleed plant, old man’s pepper, devil’s nettle, sanguinary, milfoil, soldier’s woundwort, thousand-leaf, bloodwort, carpenter’s weed and many more. The genus name, Achillea, refers to Achilles, the Greek hero of the Trojan Wars who used common yarrow to treat his soldiers’ wounds. The specific epithet, millefolium, refers to the highly cut foliate.

Just about anyone who has ever hiked a trail in early summer has seen common yarrow and welcomes it as relief from the constant green. It’s that one-to-two feet tall plant on the edge of the trail that has finely cut, fern-like foliage and a flat-topped, compound corymb of tiny, white-to-cream colored flowerheads composed of five ray florets and an equal number of pale yellow disk florets. Both the leaves and stems are covered in fine hairs, and the foliage is often curled or crinkled. All parts of the plant have a distinctive, strong, perhaps soapy odor, if crushed.

Common yarrow provides both pollen and nectar to a wide variety of visiting insects – bees, wasps, ants, flies, beetles, butterflies, moths and even true bugs. Other insects feed on the foliage and stems. Because of the strong scent of the foliage, however, most mammalian herbivores avoid common yarrow.

As might be expected, given common yarrow’s many common names, it has a long history of medical uses. It has been made into infusions and poultices, and even chewed, to treat just about every ailment imaginable – abscesses, burns, boils, diarrhea, battle wounds, fevers and toothaches. It has been used in smudges to deter mosquitoes and, during the Middle Ages, was brewed into beer. It’s truly a multi-purpose plant.

Common yarrow grows along trails, in fields, meadows and clearings where the soil is mesic to dry and poor. It spreads quite aggressively via rhizomes and tends to form dense mats. Since the plant tends to flop in all directions, it can look quite untidy near the end of the season, thus making it a difficult plant to incorporate into a tidy garden. It works best when supported by other plants and placed in an area where it can spread.