All aboard The Tipsy Carriage 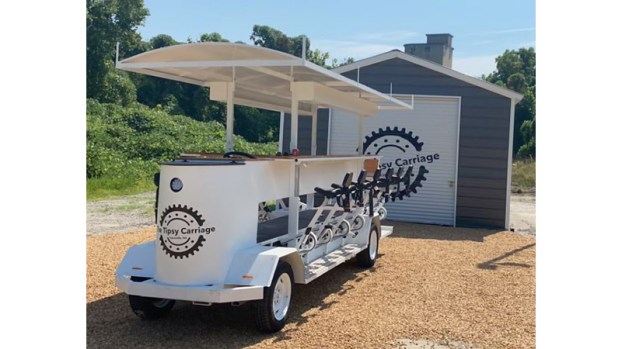 The Tipsy Carriage, constructed in Spain and shipped all the way to Farmville, will take riders on a two-hour tour around town while stopping at various bars and restaurants. 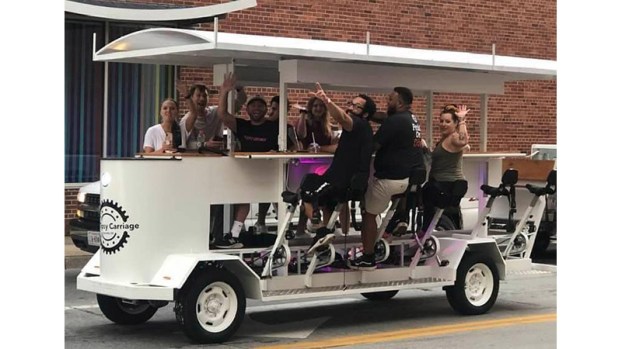 The Tipsy Carriage was hard to miss as it made its maiden voyage across town. Riders in the front row include co-owner Brandon Toney, Charles Edwards and Jessie Edwards. Back row riders include Amie Dews, Nick Stansfield, Ricky Solorio and Haley King. In the carriage’s driver seat is co-owner Jacob Jamerson.

After a successful maiden voyage, Farmville’s latest and greatest mode of transportation across the area, The Tipsy Carriage, is finally up and operational.

The brainchild of local business partners Jacob Jamerson and Brandon Toney, the carriage, which arrived in Farmville Wednesday, Aug. 11, after being shipped all the way from Spain, takes riders on a tour of Farmville featuring frequent stops at various bars and restaurants across town.

In May, the Farmville Town Council approved a revision to an ordinance originally designed to regulate taxi cabs in order to accommodate the carriage, a type of party bike that has grown in popularity among other Virginia cities.

Weighing in at just a little over a ton, the bike, Jamerson noted Wednesday, Aug. 18, is considered a quadricycle. Owners decided to name the bike “The Tipsy Carriage” because the vehicle falls under the same laws as a horse-drawn carriage.

While up to 14 riders can each pedal the bike in order to get from place to place, the carriage is also equipped with two small motors that assist in traveling up large hills or when riders are not on the bike. Pedaling does account for 80% of the power when the bike is at its 14 rider maximum. A Tipsy Carriage employee steers and operates the vehicle.

To book a tour on this exciting addition to the town, individuals can go to www. thetipsycarriage.com and book either a private or public tour. For $350, guests can book a private tour which would ensure a minimum of eight passengers for a personalized tour experience. Public tours come in at $25 a seat and serve as a great way to meet new friends.

Tipsy Carriage tours start at Three Roads Brewery on West Third Street and advance to the Virginia Tasting Cellar on Mill Street and Bandidos on High Street. The bike, Jamerson said, goes all the way around the Robert Russa Moton Museum and then advances to the Catbird Rooftop Terrace on High Street. From there, the bike goes around the North Street Press Club on North Street before returning to Three Roads Brewery.

Jamerson said the bike’s premiere in town was greeted with waves, smiles and excitement.

“I am thankful to the town for passing such a different idea and allowing me and my partner to bring something adventurous to our growing town,” he said Wednesday. “We can’t wait for everyone to take a tour and see Farmville like never before.”