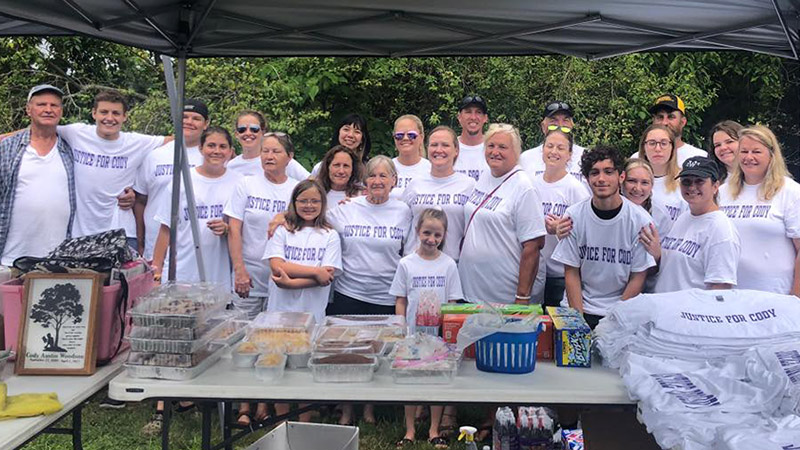 Scores of citizens came out Saturday to help raise funds for a memorial scholarship named after former Buckingham County High School graduate and VCU student Cody Woodson. In addition to baked goods and BBQ, “Justice for Cody” T-shirts, bracelets and magnets were also sold during the event, with all proceeds going toward the scholarship fund.

Woodson, 20 at the time of his death, was tragically shot and killed April 5 in the 400 block of Gilmer Street in Richmond where he was living as a Virginia Commonwealth University (VCU) student majoring in computer science.

The VCU Department of Computer Science recently announced the creation of a Cody Woodson memorial scholarship to honor Woodson’s memory. The department hopes to offer the scholarship annually to students who represent the same kindness and drive displayed by the former student.

A fundraiser was held Saturday in the parking lot of Reid Super Save Market in Dillwyn to help raise funds for the scholarship. The event included a yard sale and bake sale. The Mama Crockett’s Cider Donuts food truck and Kiss My Butt BBQ company were also present.

Friends and family of Woodson were also present Saturday to sell “Justice for Cody” T-shirts, magnets and bracelets as part of the fundraiser.

Angie Wright, Woodson’s mother, said Tuesday, June 29, the event was a phenomenal success, bringing in $6,000 toward her son’s memorial scholarship.

“It was wonderful,” Wright said.

Wright expressed her gratitude for all who came out to support the event as well as those who made the fundraiser possible.

“If Cody just knew how much he meant to everyone …” she added. “Cody definitely left an impact on everyone he met whether he knew it or not.”

Checks can be made via mail to Cody Woodson Computer Science Scholarship, VCU College of Engineering, Box 843042, Richmond, VA 23284-3042.

T-shirts, bracelets and magnets can still be purchased by contacting Angie Wright via phone call or text message at (434) 547-8761. All proceeds go toward the scholarship.