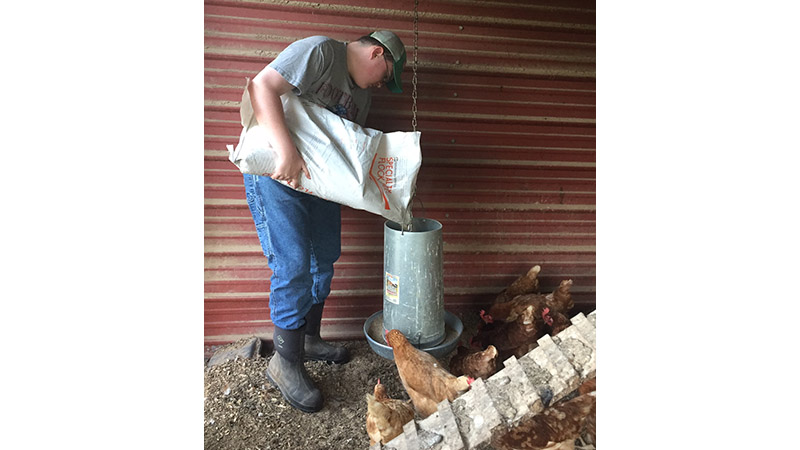 Tanner Wise feeds the chickens. He will graduate from Buckingham High School in 2022.

Wise has held several officer positions throughout his membership, most recently as the 2020-2021 second vice president.

Wise has competed in the Agriscience Demonstration and Livestock Judging Contests over the years. Not only is he active in FFA, he is also active in the Buckingham 4-H. He plans to graduate from BCHS in May 2022. Moreover, he is also working towards an associates degree in general studies: agribusiness specialization from SVCC in Keysville. Wise’s supervised agricultural experience is working on his family’s farm, Poplar View Farm.

When asked to describe his S.A.E. he said, “Feeding, watering and maintaining the flocks of chickens and sheep since 2014. Over the years we have raised sheep for breeding stock and meat products. We have raised laying hens since 2014 which has developed into us selling eggs to three local stores; two in Buckingham County and one store in Cumberland County,” he said. “I raised a Hereford show heifer from 2019 until I sold her in 2020. I also raised boar goats from 2014 -2017 that I showed and raised for meat. In 2013-2014 I raised two market hogs and showed them as well.”

Wise is no rookie when it comes to working on the farm.

“I have helped since the beginning of the business in 2014. I started helping my father feed, water, and maintain our flock’s health,” he said. “I also helped my father administer vaccines and dewormer to the flock.”

Over the years he has had more responsibilities given to him.

“Now, I help assist in record keeping of the flock as well as picking up farm supplies as needed,” he said. “I also interact with customers selling eggs, sheep breeding stock and meat products.”

Farming can be tough with long days and backbreaking work, but there is a bright side. Wise described his favorite part of raising livestock and chickens?

“Being a part of the agriculture industry and using the knowledge that I’ve gained to major in animal and poultry science at Virginia Tech. I also enjoy interacting with the customers and using social media to promote the farm.”

So how does Tanner promote the farm?

“The main platform that we use is Facebook. We post pictures of me showing livestock, showing our products, and our other animals that we have on the farm,” he said. “Our Facebook page allows our customers to interact with us and allows us to hear feedback. We also have a website that we promote our business on that provides information on our sheep and chickens and general information on farming. Our website is https://poplarviewfarm.com.”

“I started by showing a market lamb in 2013. I began showing at 9 years old and over the years I have shown animals at the Piedmont Area Jr. Livestock Show and at the Five County Fair,” he said.

Not only does Poplar View Farm sell to stores, they also sell directly to the customer.

“People buy our product because of who we are; trustworthy and honest,” Wise said. “Our family is well known in the Buckingham area for generations and people like to support local businesses. Also, there are not many sheep in this area which attracts customers that want a fresh, local product. We pride ourselves on our quality meat and eggs.”

One of the FFA’s goals is to prepare members for their career.

“I would also like to work somewhere such as Southern States or Tractor Supply before I start my own agricultural based business,” Wise said. “This would allow me to gain experience about running a business and interacting with customers. I would also like to have a small hobby farm on the side.”

Wise said his SAE has taught him several things.

“I have learned the importance of responsibility and how to interact with customers. I’ve enjoyed learning about how a business operates and how it is managed.”