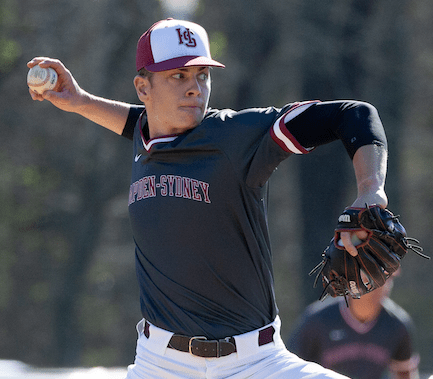 Former Randolph-Henry High School and H-SC standout Bradford Webb was selected by the Texas Rangers in the seventh round of the MLB Draft Monday, July 12.

Former Hampden-Sydney College baseball standout Bradford Webb was selected by the Texas Rangers in the seventh round of the 2021 Major League Baseball (MLB) Draft Monday, July 12, during the second day of the three-day, 20-round amateur draft.

The 194th overall selection, he is the first (former) Tiger to be drafted by MLB during the 18-year tenure of current head coach Jeff Kinne and the first overall since 1987.

“Texas could not have selected a better person,” Kinne said. “Bradford has worked extremely hard for a very long time. I am excited to see what he does with this opportunity.”

The 6-3, 200-pound right-handed pitcher played during the recent 2021 season as a graduate transfer student-athlete at NCAA Division I VCU. Webb made 17 appearances for the Rams, including 14 starts, leading the team with 57 strikeouts and a 3.16 ERA over 57 innings. He was named to the Atlantic 10 Championship All-Tournament Team after an eight-strikeout effort over five scoreless innings of a 10-4 win against Rhode Island at The Diamond in Richmond and started VCU’s opening game of the NCAA Regional in Starkville, Mississippi, posting five strikeouts over 4.2 innings of a 19-4 win against Campbell.

During the abbreviated 2020 season (COVID-19) at H-SC, Webb made six relief appearances with three saves while compiling a 1-0 record with a 1.29 ERA and 11 strikeouts in seven innings pitched. He tied for first in the Old Dominion Athletic Conference (ODAC) in saves, and ranked sixth nationally. A three-year team member and 2020 team captain, Webb made 30 career mound appearances, starting six games with a career record of 3-6, a 6.93 ERA, 62.1 innings pitched, 54 strikeouts, 24 walks and five saves-tied for sixth all-time.