The oxeye daisy is a weed, but an interesting one 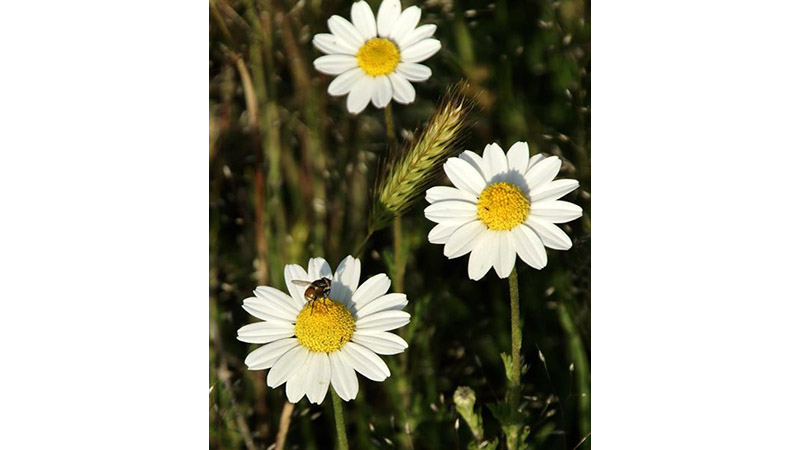 Wander around the edge of the woods near the office at Holliday Lake State Park, and you’ll likely find several oxeye daisies (Leucanthemum vulgare) blooming any time from late January until now.

Like the dandelion, the oxeye daisy is a nonnative, perennial member of the Aster family and one of the most widely recognized wildflowers.

The oxeye daisy is originally from Europe and temperate parts of Asia, but has spread throughout much of the world. It has been documented in England since the Iron Age and the occupation by the Romans. It was introduced to the United States via contaminated seeds and as an ornamental plant for home gardens. Despite being on the invasive species list of more than 10 states, it’s still possible to purchase the seeds here.

The oxeye daisy grows 10 to 36 inches tall and spreads via rhizomes. It has large basal leaves and smaller leaves on the stems; they are all toothed and lobed. The stems are hairy. The flowerheads are daisy-like with 15 to 40 white ray florets and numerous yellow disc florets. A single plant can produce up to 40 flowering stems and more than 4,000 seeds that can remain viable for at least 40 years.

The oxeye daisy has been used in folk medicine for hundreds of years. Nicholas Culpepper, the 17th century English physician, noted in his “Complete Herbal” book that the oxeye daisy was “a wound herb of good respect…and giveth great ease in palsy, sciatica, or gout.” The flowerheads have been used to brew teas considered useful in treating coughs, stomach problems, diarrhea and loss of appetite. It has also been used to treat skin and eye problems.

The oxeye daisy is edible. Although they are bitter, the leaves can be braised like other potherbs. The unopened flower buds can be brined and eaten like capers.

There are many folk traditions associated with the oxeye daisy. The old Norse name for this plant was Baldur’s Brow. Baldur was the most beloved of all Norse gods; he was killed by Loki the trickster during a prank that went bad. The Greeks dedicated the oxeye daisy to the goddess Artemis and thought that it could improve fertility. During the Middle Ages, the oxeye daisy was associated with Mary Magdalene. In Medieval Scotland, oxeye daisies were called gools. Because the milk of cows and sheep that had eaten oxeye daisies was bitter, local governments tried to solve the problem by imposing a special tax on farmers who had the most daisies in their fields. And then there are the many childhood divination games associated with the oxeye daisy: “He loves me, he loves me not…” Most of these games are to determine a lover’s intent or the number of children that a girl will have.

The oxeye daisy is common throughout Virginia and can be found in fields, meadows, along roads and in other disturbed areas. It’s a weed, but an interesting one, and a plant everyone should be able to recognize.