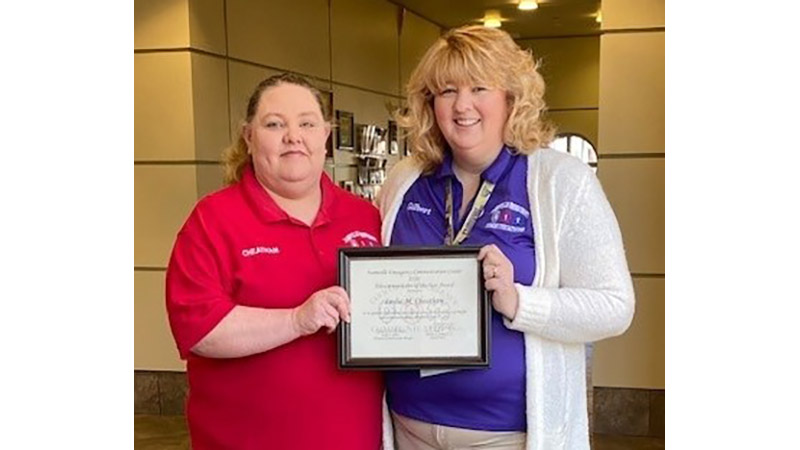 Leslie Cheatham is a person who has spent most of her life helping others, whether as a telecommunicator for the Town of Farmville, an EMT in her earlier years in Campbell County and Pamplin or as a community member who tries to quietly help others’ satisfy needs.

Cheatham joined the Town of Farmville eight years ago as a dispatcher. Now, 49, she said she didn’t feel like she could spend as much time out in the field as an EMT as she used to, but being a dispatcher still keeps her involved with helping save lives.

“I do miss being out in the field with the EMS, but I do enjoy being a telecommunicator also. I’m still able to be able involved, just not so much hands on,” she said.

Earlier this year, Cheatham was honored as Farmville’s telecommunicator of the year for using some quick thinking and internet searches to determine a suspicious car, reported by a Farmville police officer, was actually a stolen vehicle.

“Come to find out the vehicle was stolen, but it wasn’t entered into the system as stolen,” Cheatham said. Her quick work to trace down the tags discovered the car had been stolen from a tow yard in Richmond. “I was just doing my job.”

Part of Cheatham’s job as a telecommunicator for Farmville recently changed as the dispatchers now provide instructions and help the 911 callers with some lifesaving procedures, such as CPR, until help can arrive.

“We are able to do CPR, so we are able to tell people how to stop bleeding, CPR and things like that,” she said. “You just follow the script and you are able to help people. It’s a pretty good feeling.”

The McDowell County, West Virginia native began her career as a fast food worker. He father was a coal miner and her mother stayed home with Cheatham and her two sisters.

After her father died last year following a five-year battle with lung cancer, Cheatham has spent time taking care of part of her family back in West Virginia while keeping things going with her family in Appomattox.

“I try to take care of them as well as I can,” she said, saying she makes trips back to her childhood home when she needs to.

In her personal life, Cheatham said she tries to help as many people as she can.

“I have a big heart, but I try to hide it,” she said of her efforts to help others, particularly those in the EMT family. “If I have it, I’ll make sure that they either get it from me, or get it from another source if I need to.”

She said the past year has taught her to enjoy life while she can.

“Just spend more time with family and friends because I love my job,” she said. “It’s something different every day. I just love what I do.”