Sweet treats for a cause 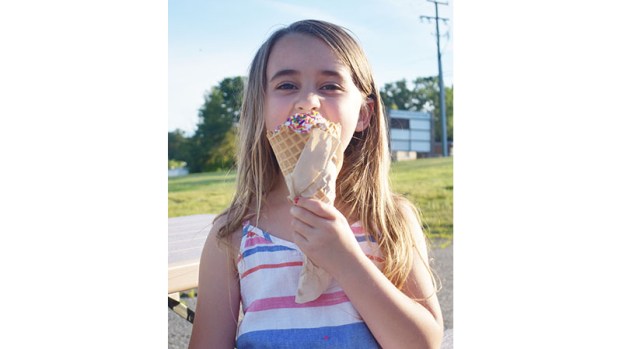 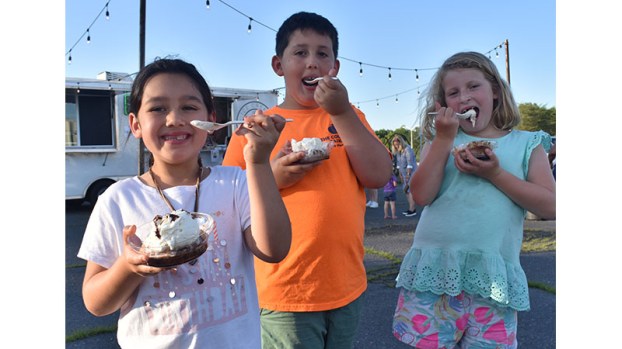 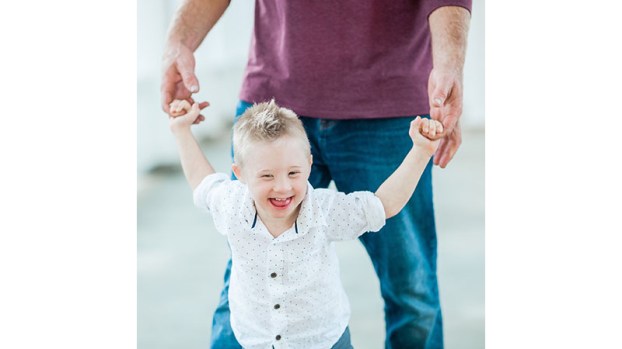 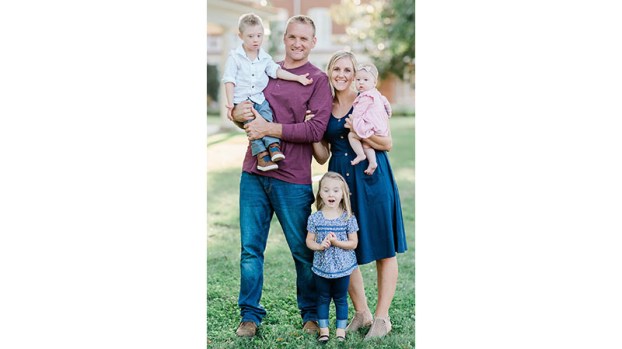 The Raber family enjoys bringing the community together with delicious frozen treats, all while raising awareness for disabilities such as Down syndrome and autism. From left are Landon, Jason, Joy, Cynthia and Lauren. (Photo by Jessica Lapp Photography) 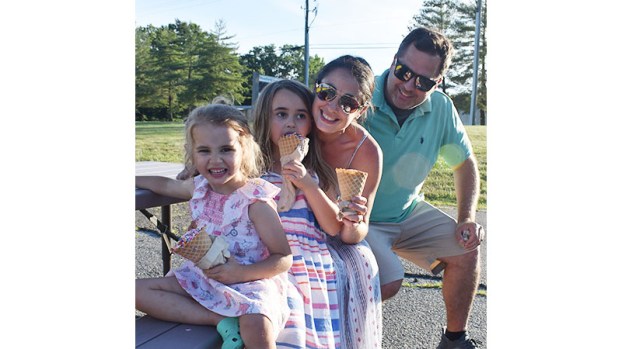 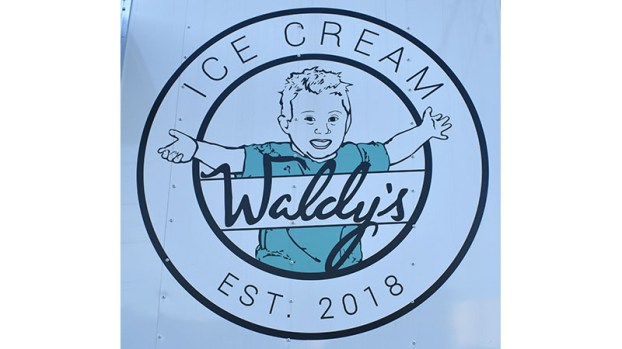 The Waldy’s logo displays a picture of Landon, nicknamed Waldy. Landon’s favorite flavor of ice cream is peanut butter, which inspired the creation of the “Waldy’s PB and J” ice cream featuring a vanilla base with ribbons of peanut butter and strawberry. (Photo by Alexa Massey) 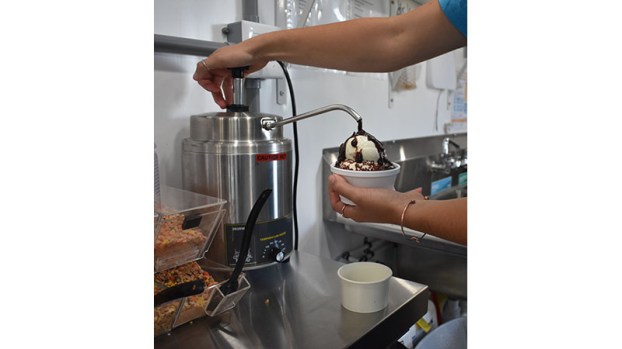 Hot fudge is just one of the many toppings customers can choose for their ice cream. (Photo by Alexa Massey) 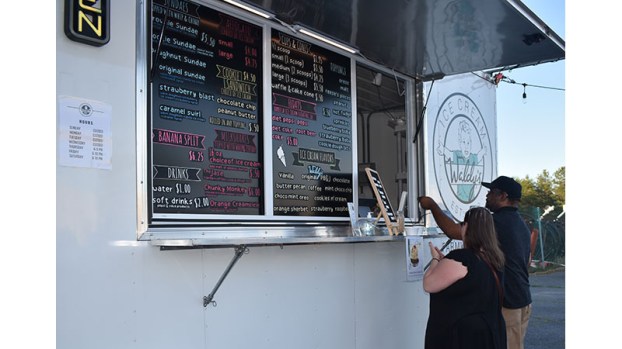 The summer heat and the promise of delicious ice cream keeps customers lined up at the Waldy’s Ice Cream truck. (Photo by Alexa Massey) 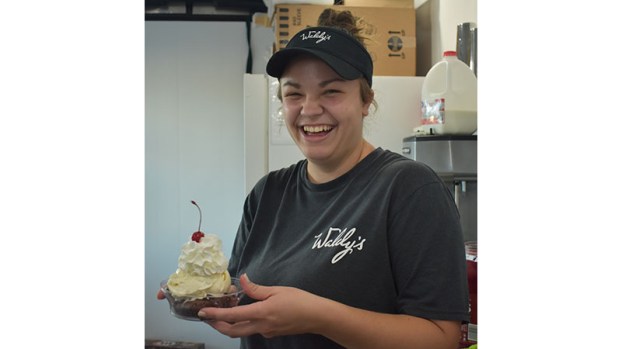 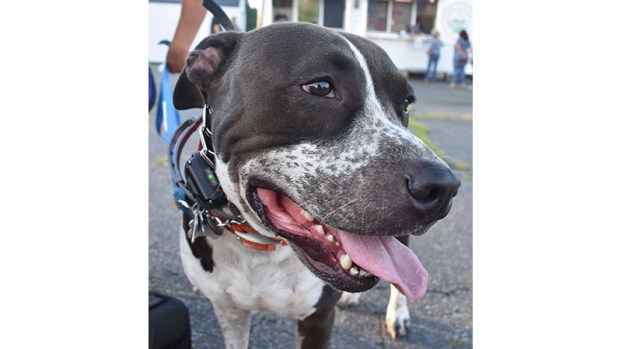 Dewey the dog did not order any ice cream June 4, but he may have stolen a lick or two when somebody wasn’t looking. (Photo by Alexa Massey)

Hidden away among the warehouses and baseball fields scattered along Industrial Park Road in Farmville is an ice cream truck serving delicious, frozen treats while spreading awareness for children and adults with disabilities.

Cynthia Raber and her husband, Jason, live just outside of Farmville with their three children, Landon, age 5; Joy, age 4; and Lauren, age 1.

When Cynthia was pregnant with their first child, Landon, the couple were made aware their baby was displaying certain heart issues. Although Landon’s cardiac problems cleared up while in the womb, upon birth, it quickly became clear there was something different about him.

As a baby, Landon was diagnosed with Down syndrome, a condition in which a person is born with an extra copy of their 21st chromosome, causing physical and mental developmental delays and disabilities.

Landon’s case would grow even more rare after also being diagnosed with autism just before his third birthday.

Landon’s dual diagnoses were extremely uncommon, and the family knew they faced many challenges ahead, but with the help of community and Christ, the Rabers have been able to learn and grow together. Now, they’re hoping to spread awareness of children and adults like Landon through a medium everyone can enjoy — ice cream.

Cynthia, who grew up with four other siblings, was spending time with her family one evening in 2018 when an idea was formed. Her father owns an industrial building located on Industrial Park Road, the same road where the Raber’s attend church at Calvary Chapel in Farmville.

At the time, many potential businesses were coming into the warehouse, and multiple family members remarked how great it would be to be able to feed those workers coming through.

After racking their brains for the perfect summer treat, Cynthia and her family quickly came up with an idea to purchase a food truck and sell frozen desserts.

It wouldn’t be enough to just sell ice cream, though. The family wanted their business to have a cause. Together, family members decided to name the truck “Waldy’s Ice Cream” after Landon’s nickname, Waldy, and agreed to use their business to raise awareness for other individuals with disabilities.

The whole family pitched in to get Waldy’s Ice Cream up and running. A trailer was purchased down in Georgia and was set up inside with all the equipment and other necessities to run an ice cream truck.

By 2019, the truck was up and running, and Cynthia and her family began venturing out to different food truck events in order to promote their business. In 2020, the family decided to keep the ice cream truck stationary. Now, Waldy’s Ice Cream is permanently located at 300 Industrial Park Road in Farmville.

Waldy’s is open seasonally from early April to the end of October. The business operates Thursdays from 6 to 9 p.m. and Fridays/Saturdays 6 to 10 p.m.

Since parking in town, Waldy’s has become immensely popular among citizens both young and old, and it’s not hard to see why.

The business uses Ricihland’s Dairy ice cream. Customers can purchase cups and cones of ice cream in a variety of flavors and sizes, and Waldy’s also offers items such as milkshakes, cookie ice cream sandwiches, floats and banana splits. One of the truck’s top sellers is its specialty sundaes, including treats such as brownie sundaes, donut sundaes, cookie sundaes and other limited-time offerings such as banana bread sundaes. There’s also a wide variety of toppings to choose from.

Community response has been fantastic, and a long line can often be found snaking through the truck’s parking lot as scores of locals wait for a chance to get their hands on some of the best frozen desserts around. Several picnic tables are available on site for customers to sit down and enjoy their treats, and visitors can also try their hand at a game of cornhole.

“We have so much support. We’re so thankful for that,” Cynthia said.

She noted while her family loves serving the ice cream, their biggest joy comes from seeing how the business brings the community together.

Waldy’s also helps to bring together those in the community who have a family member like Landon, arranging meetings with local families who have kids with disabilities and serving as a support group for people in similar situations.

“Our mission is to help him and others like him,” Cynthia said.

Although operating an ice cream truck takes a lot more work than the family may have originally thought, being able to share this experience together, Cynthia said, has been nothing short of amazing.

“It’s definitely a blessing,” she added. “We feel like God has just opened the doors for it to happen and has blessed it because I don’t know how we would have done it without him helping us.”