Louis Atkins Graham was born March 27, 1925 in Kenbridge, to Samuel Lyle Graham III and Natalie Hardy Graham. He lived in Farmville until adulthood.

Louis Atkins Graham attended Hampden-Sydney College for one year, and then served with the United States Navy in World War II from 1942-1945. Louis later graduated in 1949 from the University of Virginia where he received a Bachelor’s of Science degree in Chemical Engineering. He then received his Masters’ of Science degree in Chemical Engineering from the University of Louisville in Louisville, Kentucky in 1950 and also took advanced courses in technical color from Purdue University in Illinois.

Louis joined the American Viscose Division of the FMC Corporation in 1950 in Parkersburg, West Virginia, as Plant Color Engineer and Technical Department Color Engineer. While at AM, Lou met the love of his life, Jean Crawford Nelson.

They were married on June 18, 1955. In 1956, Lou and Jean had their one and only child, Natalie Jean, and relocated with AM to the Philadelphia, Pennsylvania area, where he held various positions as a color specialist, a key synthetic fiber researcher and the Senior Manager of color and science from 1956-1967.

Beginning in 1957, Louis joined the Inter-Society Color Council (ISCC), serving and chairing numerous committees, including the Council’s Long Range Planning Committee from 1988-1993. He was also ISCC’s president from 1982-1984. 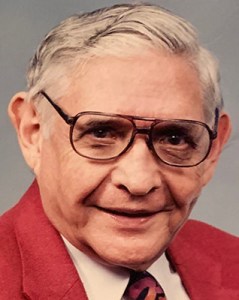 From 1967 until 1987, Lou was Senior Manager of Corporate Research and Development at Burlington Industries in Greensboro, North Carolina, with responsibility for the dyeing, computer and color laboratories. His employment involved extensive travels around the world.

Following retirement from Burlington Industries, Louis formed “Lou Graham & Associates, Inc.”, where he developed the HVC Color Vision Skill Test, later sold to a large corporation. His consultant work continued worldwide, allowing him to travel and live in various countries with his wife, Jean, including Zimbabwe and Mauritius through his involvement on projects with the International Executive Service Corporation (IESC).

Louis has now left his earthly home to join his beloved wife Gigi in a heavenly world full of color and peace.

Lou and Jean’s final resting place together will be with the Graham family in Farmville, where a private service will be held at a later date.

The family would like to thank Dr. Thomas “Philip” Reilly and the team of extremely skilled and empathetic colleagues, especially Drs. Bird, Zhang, Rotenberry (aka Paul Newman) and Tsai as well Ms. Donna Reese and many others, who, over the 6 years Lou spent visiting the Urology department at Baylor Scott and White, treated, counseled, and consoled my father and our family with the utmost patience, care and respect. Also essential to Mr. Graham’s well-being were the numerous teams of excellent MDs, DOs, RNs, LVNs, PAs, CNAs and support staff who cared for him patiently and professionally through critical and difficult stays at BSW Hospital. We also embrace all of Lou and Jean’s absolutely wonderful circle of close friends who enriched the Grahams’ lives so much, Tony Jeter and the devoted caregivers from Tender Mercies who cared for (spoiled) both of them so lovingly, as well as members of the Temple Meridien, Encompass Home Health, Amedisys Hospice, Scanio-Harper Funeral Home and Grace Presbyterian Church.

In lieu of flowers, please consider making a donation to a charity of your choice or one of those that Lou supported: Kiwanis, Temple Railroad and Heritage Museum, the Cultural Activities Center, Texas Scottish Rite Children’s Hospital in Dallas and Grace Presbyterian Church.