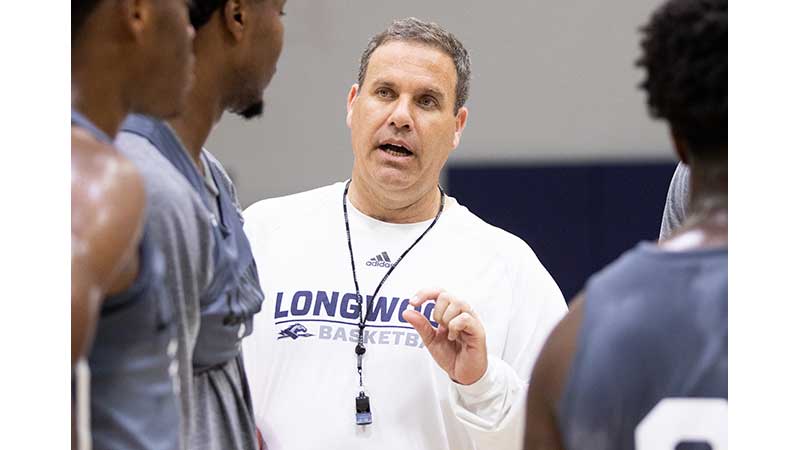 Shortly after he was named Longwood men’s basketball head coach in March of 2018, Griff Aldrich made “On The Rise” a calling card of the program.

Now entering his fourth year at the helm and fueled by three years’ worth of milestones, Aldrich is poised to continue Longwood’s climb well into the future.

Longwood Athletics Director Michelle Meadows announced Tuesday an extension to Aldrich’s contract that will lengthen his tenure as head coach of the Lancer men’s basketball program through the end of the 2028 season.

“We are thrilled to extend coach Aldrich’s tenure as head coach of our men’s basketball program,” Meadows said. “When we hired him in 2018, he laid out an ambitious vision for Longwood basketball and a steadfast belief that we could build a championship program. He has never wavered from that, and we have seen it become more of a reality every year.”

The extension follows a milestone-filled three-year stretch for the Lancers since Aldrich took over the program in March of 2018. A 1996 graduate of neighboring Hampden-Sydney College and a native of the Tidewater area, he has twice taken Longwood to postseason tournaments with invitations to the College Basketball Invitational (CBI) in 2019 and 2021, posted back-to-back top-five Big South finishes in 2020 and 2021, and engineered the program’s winningest three-year run of the Division I era with a combined 42 overall wins and 24 Big South wins.

Longwood’s 42 wins since 2018-19 rank among the program’s winningest three-year runs of the past 25 years. Only the 2000-01, 2001-02 and 2002-03 Longwood teams – which included a 23-8 season in 2000-01 behind Division II National Player of the Year Colin Ducharme – combined to win more games in successive seasons during that span. Additionally, Longwood’s 24 Big South wins under Aldrich are more than the Lancers won in their six prior years in the conference combined.

“The successes Longwood basketball has experienced over the past three years have been the byproducts of immeasurable work and commitment behind the scenes by coach Aldrich, his staff and the student-athletes he has recruited to Longwood,” Meadows added. “Coach Aldrich has shown the potential for Longwood men’s basketball to be sky high, and we are excited to see the program continue that growth under his leadership.”

Grounded in pillars dubbed the “Longwood Five” – excellence, grit, humility, gratitude and service – Longwood has achieved major milestones in every year of Aldrich’s time at the helm. That began in year one when the 2018-19 Lancers earned an invitation to the College Basketball Invitational to advance to a postseason tournament for the first time in the Division I era. Year two saw that momentum continue when the 2019-20 squad finished fourth in the Big South conference with a 9-9 record, setting program benchmarks for both Big South finish and Big South wins.

Last year, in Aldrich’s third season, the Lancers added to their resume with a trip to the Big South semifinals, another invitation to the CBI, and a 10-10 Big South record, which broke the previous year’s record for Big South wins.

“My wife, Julie, and I are thrilled about the opportunity to continue to lead the Longwood men’s basketball program and invest in this university and community,” Aldrich said. “We are grateful to President (W. Taylor) Reveley and Michelle Meadows for this opportunity as well as their exceptional support and vision. Our three years at Longwood have been extremely special, and we look forward to continuing to build a championship caliber program that our students, alumni and community members can take pride in.”

Longwood’s success under Aldrich has extended off the court as well with record-breaking performances in the classroom and graduation stage. Every semester since his first in the spring of 2018, Aldrich’s Lancers have exceeded the previous semester’s grade point average, most recently culminating with a program-record 3.29 GPA during the spring of 2021. Seven Lancers made the dean’s list this past spring, all of whom Aldrich recruited to Longwood.

Additionally, Aldrich has initiated several facility upgrades for Longwood men’s basketball, including a renovated locker room and player lounge, film room and aesthetic updates to the student entrance to Willett Hall. Those are in addition to the Joan Perry Brock Center, the new home of Longwood basketball set to open in summer of 2023 that was made possible by a $15 million gift from Joan Perry Brock.

“The vision that President Reveley and Michelle Meadows have cast for Longwood basketball is extremely exciting,” Aldrich continued. “With the arrival of the new Joan Perry Brock Center in 2023 as well as the continued investment in this program, I could not be more excited about the future. And while we are proud of the foundation that has been established, we are even more excited about the future of this program. Longwood basketball is on the rise.”