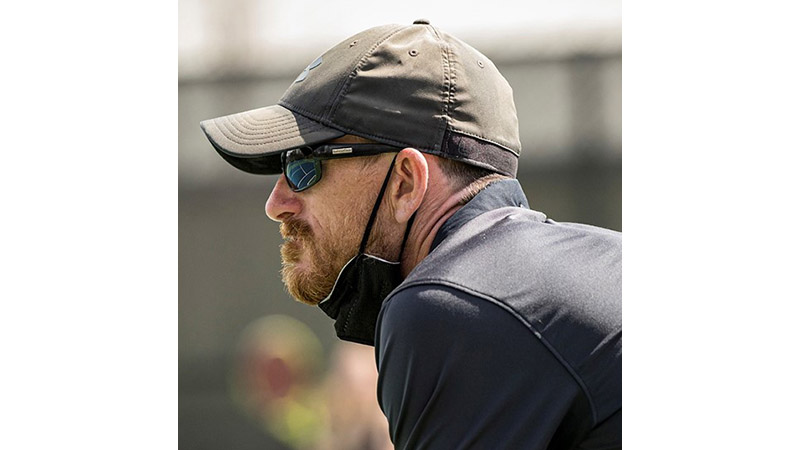 With a coaching resume defined by championship success at the national and conference level, Jackson was a two-time South Atlantic Conference Coach of the Year and four-time SAC champion at Tusculum, and won a combined three NAIA National Championships in both men’s and women’s tennis as an assistant coach at Georgia Gwinnett.

At Longwood, Jackson will assume command of two burgeoning Lancer programs that hit major milestones under former director of tennis Jhonnatan Medina Alvarez and are also on a run of three consecutive semesters as the top-performing academic teams in the Longwood athletics department.

“We are thrilled to welcome Adam Jackson as Longwood’s next director of tennis and head coach of our Longwood men’s and tennis programs,” Meadows said. “With championship success and consistent national recognition in both men’s and women’s tennis at Tusculum, his resume speaks for itself. However, what is most impressive is his approach as a coach, which places a heavy emphasis on team culture, student-athlete development, and inspiring an all-around commitment to excellence within all of his players.

“During the interview process, Adam made those elements of his coaching philosophy well known, along with his championship vision for Longwood tennis. I would like to give a special thank you to [senior associate athletics director/external relations] Katie Pate for leading the search and identifying Adam as such a strong candidate. Both of our Lancer tennis programs have made significant strides over the past several years, and we are excited to bring in Adam to continue that momentum.”

A 2007 graduate of Appalachian State who also holds a master’s degree in secondary education from Piedmont College, Jackson amassed a 177-55 overall record in his six years coaching Tusculum’s men’s and women’s programs. His men went 83-37 and won SAC Championships in 2016 and 2021, while his women’s teams went 94-30 with SAC titles in 2017 and 2019, three consecutive NCAA Tournament berths, and four top-two finishes in the SAC standings.

The Pioneers experienced historic success on both an individual level as well under Jackson, including the program’s first-ever female All-Americans in twin sisters Annie and Caitlin McCullough, two ITA Cup National Championship runners-up, and two SAC Players of the Year, one male and one female.

“I would like to thank [senior associate athletics director/external relations] Katie Pate for her help in bringing me to the Longwood family and athletics director Michelle Meadows for trusting me to lead the men and women of Longwood tennis,” Jackson said. “I am extremely excited about the future of the programs and I can’t wait to get on the court with the student-athletes. My family and I are all excited to become a part of the Longwood community.”

During Jackson’s tenure, Tusculum’s success went beyond the SAC conference to the national level with his women’s team achieving the program’s highest-ever ranking at No. 14 in 2018, and the men doing the same at No. 24 in 2021. Tusculum’s highest-ever top-25 wins also came under his direction, with the women knocking off No. 11 Wingate in 2019 and the men toppling No. 16 Queens in 2018.

That success followed a breakthrough start in the college coaching world, which Jackson began as an assistant coach at NAIA national powerhouse Georgia Gwinnett in 2013. In his two seasons with the Grizzlies, Jackson helped head coach Chase Hodges capture back-to-back NAIA National Championships in men’s tennis in 2014 and 2015, as well as a women’s national title in 2014 and a runner-up finish in 2015. The Grizzly men went a combined 37-2 during his tenure, while the women went 29-11.

Along with his experience at the collegiate level, Jackson was also a high school boys’ coach at Grayson High School in Loganville, and a teaching professional at both the Jennings Mill Country Club in Bogart, Georgia, from 2001-09, and The Georgia Club in Statham, Georgia, from 2012-15.

A decorated student-athlete at Wingate from 2001-03, Jackson helped the Bulldogs to a national ranking and the program’s first NCAA Tournament appearance in more than a decade in 2002. He also won a Georgia High School State Championship in 1999 and was the state’s Region 8AAA singles champ as a senior in 2001.

Jackson has also been involved with college tennis administration and professional development at the national level, serving on the NCAA Regional Advisory Committee since 2019.

A native of Watkinsville, Georgia, Jackson and his wife, Dana, have two sons, Gus and Jake.