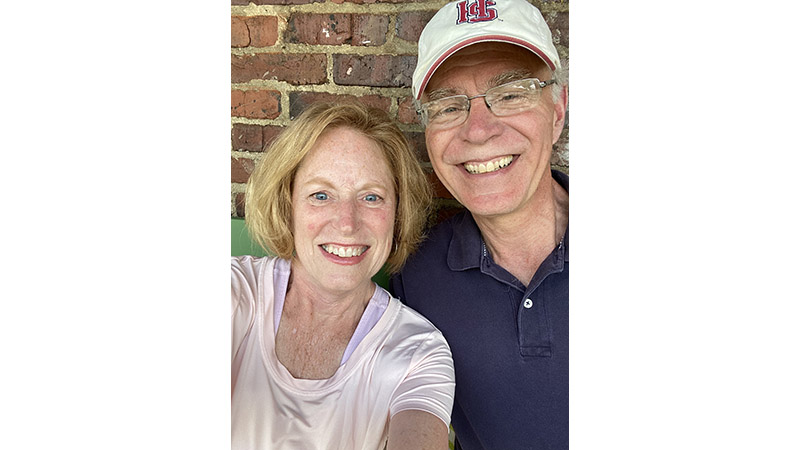 Barbara Kiewiet de Jonge and her husband Niels. He was a history teacher at Prince Edward County High School for 27 years and then at Fuqua School for eight years. The couple has three married sons and five grandchildren.

After nearly 20 years as a student health nurse at Hampden-Sydney College, Barbara Kiewiet de Jong’s last year before retirement was certainly her most difficult.

“It was the most challenging thing I have ever done in my career,” Kiewiet de Jong said of the effort to bring Hampden-Sydney students back to campus and keep them safe through the COVID-19 pandemic. “It was challenging not just for me, but for everybody. I don’t believe you can talk to a single person and not have a story on how COVID affected their lives.”

Now retired from the position, Kiewiet de Jong is spending her time enjoying walks, working in her yard, cooking, baking and cross stitching Christmas stockings for her grandchildren.

Last summer was much different. Kiewiet de Jong had just accepted a promotion from the college’s primary nurse to director of student health.

“It was a lot of months of back and forth trying to make that decision,” she said.

Hampden-Sydney’s leadership wanted students back on campus and in classes. Kiewiet de Jong helped devise the plans and policies that addressed how to safely make that happen.

“In hindsight, I think we did a fantastic job,” she said. “Not without hitches, not with learning, but there was so much unknown. We were waiting for science to catch up and for science to come up with testing that was readily available and easy to use and available economically for small health centers like ours.”

For her work keeping the students safe during the COVID year, Kiewiet De Jong was awarded the Algernon Sydney Sullivan Medallion during Hampden-Sydney’s graduation ceremony. The medallion is awarded for character and service to Hampden-Sydney.

To get her through the difficult days of the pandemic, Kiewiet de Jong turned to a Latin phase she found in June, “Dum spiro spero — while I breathe, I hope.”

Kiewiet de Jong said she doesn’t like the saying that went with the COVID effort of, “We are all in this together.”

“For some reason, that annoyed me, but it was absolutely, absolutely true,” she said. “Nothing happened by me alone.”

She said the nurses at the health center, the doctor, the dean of students and many others at the college formed a team that worked together to make the plan work.

“It was really an all hands on deck and absolutely everybody played some part or some role,” she said. “To be picked out of the whole mass of people is kind of hard for to embrace when it was just everybody.”