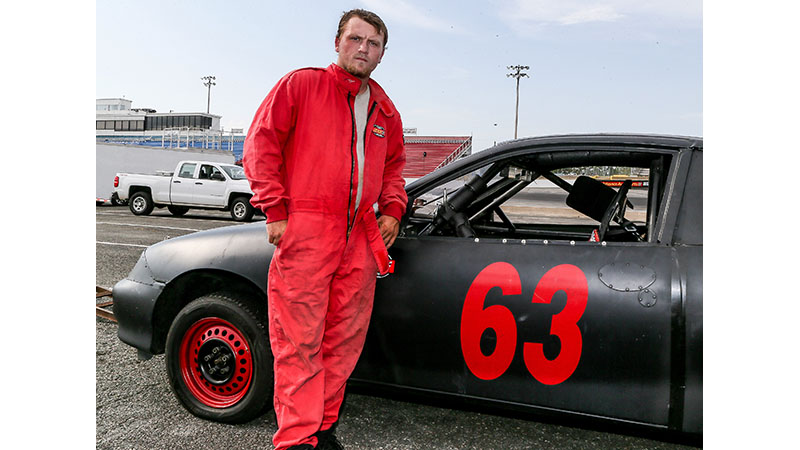 Dillon Davis of Nathalie has made the transition from baseball to racing with three top-five finishes in his rookie season at South Boston Speedway.

Dillon Davis has been a lifelong racing fan. He has also been a stand-out baseball player. After his time on the baseball diamond at Halifax County High School came to an end, he started racing in the Budweiser Hornets Division at South Boston Speedway.

“I enjoyed baseball,” the Nathalie resident said. “I’ve been a racing fan my whole life. I’ve been here at South Boston Speedway for just about every race since I was a kid. Watching and seeing everything was very interesting to me. My time for playing baseball was up after high school, so I started racing.”

Baseball and racing both require a lot of thinking and knowing what you are going to do in specific situations. Racing, Davis says, requires more thought.

“Racing definitely takes more brains,” Davis said. “There is a lot more thinking to it than you would think. You have to calculate everything. You need to keep track of everything that is going on around you and calculate your moves ahead of time.”

Like many first-time racers, Davis admitted to being nervous when he lined up for the start of his first race of the season on March 20.

“It was really nerve-wracking,” Davis said of his first race start. “The whole car was shaking because I was shaking so bad. The nerves are still there every race, but it (racing) is enjoyable.”

Adapting to driving his front-wheel-drive car in competition in the Budweiser Hornets Division is an ongoing process for Davis.

“It’s kind of tough adapting, but it hasn’t been bad,” remarked Davis. “We can change the car to make it do what we want to do, but it’s still kind of tough.”

The first-year racer is having a good season in the Budweiser Hornets Division. Davis has logged three top-five finishes and has finished in the Top-10 in all of his starts. His best finishes have been a pair of fourth-place finishes and a fifth-place effort in his most recent start on July 3.

“We’ve had a decent season,” Davis said. “It’s been pretty good for my first year. Honestly, it’s been better than what I thought it would be. It’s something I can build on.”

Practice will begin at 3:45 p.m. and grandstand gates will open at 5:30 p.m. Qualifying will start at 6 p.m. and the first race of the night will get the green flag at 7 p.m.

Advance adult general admission tickets for the August 7 Davenport Energy Night at the Races event are priced at $10 each and may be purchased online on South Boston Speedway’s website, www.southbostonspeedway.com, through Friday, August 6. Adult general admission tickets online and at the gate on race day are priced at $15 each. Kids ages 12 and under will be admitted free when accompanied by a paying adult.

Tickets purchased for the rained-out July 17 event will be honored at any one of South Boston Speedway’s three remaining regular-season events – August 7, August 21 and September 4.

Individuals that purchased tickets online for the rained-out July 17 event have already received vouchers in their online ticket account for the amount of paid tickets they had.

Persons that purchased tickets over the phone or in person can stop by the speedway office to exchange those tickets or exchange them at the next event. The South Boston Speedway office is open Monday through Friday from 9 a.m. until 5 p.m.