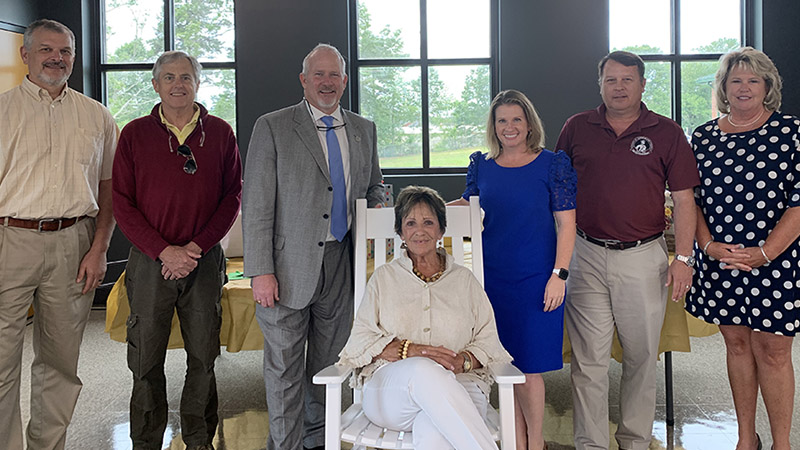 Born in Clifton Forge, Carter grew up in a family of nine. Her father worked for the local railroad and her mother worked long hours watching over seven children. As a child, Carter said she was raised to work hard and respect others, a quality most peers would say she’s carried all her life.

Carter attended Alleghany County Schools where she was involved in cheerleading and the majorettes. After graduating in 1970, she attended Dabney S. Lancaster Community College to study business management and marketing.

After leaving Alleghany County, Carter married her husband, Wayne Carter, in 1972, and the two moved together to Charleston, South Carolina where he was serving in the U.S. Navy. The couple had three children together — two sons and a daughter who unfortunately passed away in 2011.

Carter and her family moved to Buckingham in 1986 when Wayne was transferred to the area with CSX Transportation.

“We had lived in several areas of Virginia due to his job and fell in love with Buckingham County and its people,” she said.

Carter’s family decided to build a home and settle in Buckingham, beginning a small farm.

As the years went by, Carter worked for four different county administrators, often serving as the interim county admin during transitional periods.

Since then, Carter has worked with many different Board of Supervisors members to help make countless positive changes in the county.

One such change included an evolution of local water and sewer operations which helped to bring many businesses to Buckingham and the Town of Dillwyn.

Years ago, the Town of Dillwyn owned the local wastewater system and purchased water from the county plant in order to sell it to Dillwyn residents. The water system was aged and new sewer and water lines were needed badly. Carter was able to work with the Town Council in order to obtain grants and low interest loans to replace all of the town’s water and sewer lines.

The grants required that only one entity own the water lines and sewer system, so Carter helped to facilitate the county’s purchase of the sewer plant and a loan takeover for the facility. The county began selling water to the town as well as both local correctional facilities, boosting water revenue and keeping rates low for all.

Since that time, the county has obtained more than $13 million in grants to build a new water system facility, extend water lines, upgrade the existing sewer system and extend sewer lines to the Route 15 and Route 20 corridors, bringing in several new businesses.

More recently in Carter’s career, the county was able to help transform the old Dillwyn primary school into a brand new library and community center. Buckingham also recently implemented a state of the art gated waste site, one of the first in the state, which allows citizens 24/7 access to a waste site and saves the county money by preventing the site from being used by out-of-county individuals.

Under Carter’s leadership, the county has built a new administration complex, a new courthouse, and is slated to be the site of a three-story hotel which has been temporarily paused due to the pandemic. The Carter G. Woodson school complex on Route 20 was renovated and upgraded from the previously existing school buildings, and the vacant Gold Hill School building was sold to a company to renovate for the purpose of an in-house pharmaceuticals operation.

The county has also been able to implement a county-wide, county-operated emergency medical rescue squad service.

Anyone who knows Carter knows she is not one to claim any of these successes as her own. She stressed the work done during her time with Buckingham County was the product of a large team of county employees and supervisors who have worked together over the years to lead the county forward and make progress happen.

“It takes a village and many times the support of the entire county,” she said.

After a long career of handling the day-to-day operations of the local government and with her husband in failing health, Carter gave her six-month notice in December of 2020.

Wayne unfortunately passed away in April of this year.

“We had plans to camp, fish and farm,” Carter said of her beloved late husband. “Now at this point, my plans for retirement are to stay home and help with the farming, spend more time with my family and look forward to some beach and other ‘sister trips’ with my two sisters.”

Carter said she plans to stay busy by catching up on plenty of the projects she has around the house or maybe even spending some time by the pool or the ocean.

“The sounds of the ocean and the ocean air seem to soothe my mind and soul,” she added.

She will also now have plenty of time to spend with her grandchildren who lovingly refer to her as “Dede.”

Carter noted her family has experienced some life-changing losses and acknowledged it will take some time to adjust to retirement, a life-changing event of its own.

The switch was made a little easier this past week as fellow county administrators, county employees, politicians, friends and loved ones gathered for a luncheon to honor Carter and celebrate her retirement. The event was a laughter and tear-filled farewell to the woman who helped lead the county in a positive direction for more than three decades.

“I will always hold the times with the county close to my heart and always care about the county,” she said.