Opinion — Mr. Pibb brings some fizz to my life 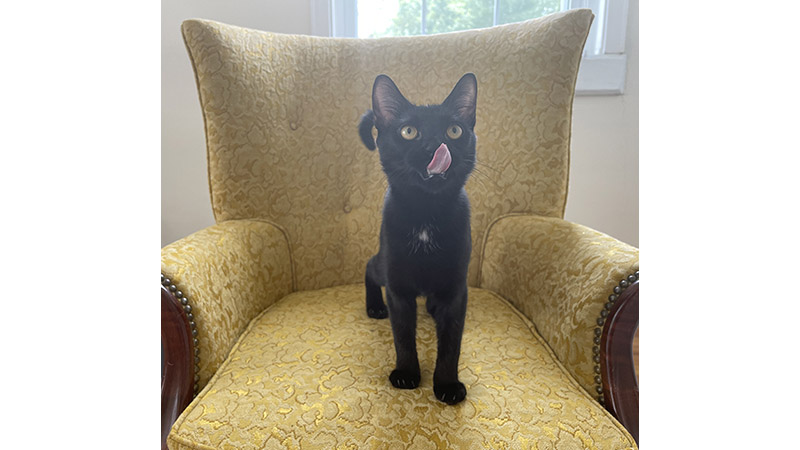 June is Adopt a Shelter Cat Month and coincides with “kitten season” in the U.S., the time in which many litters of kittens are born and often end up in shelters.

I’m celebrating this month with my own recent addition to the family, Mr. Pibb.

My boyfriend and I adopted Mr. Pibb, also known as Pibb, Pibbly, Pibbles and Little Mr., from the Lynchburg Humane Society back in January when he was roughly three months old. After looking around online, we found a picture and description of Mr. Pibb, previously named “Axel” by the shelter. He won our hearts immediately, and we applied to adopt him.

When the day finally came to take Mr. Pibb home, we drove to Lynchburg and made a quick stop at PetSmart before heading over to the Humane Society. The place was alive with the sounds of meows and barks. As we made our way to the back of the building, we were escorted to a room that had around eight kittens inside. What a dream!

Although we knew Mr. Pibb was a black cat, there were several black kittens in the room, none of which had name tags on their collar. While a worker went to go find a microchip reader, I enjoyed sitting on the floor surrounded by little playful puffballs.

A little black kitten wandered up to me and plopped down at my side. I began petting him and just knew that was little Pibb. After 25 minutes of belly rubs and ear scratches, an employee scanned the kitty for a microchip. It was indeed him.

The ride back home was tricky. Mr. Pibb cried endlessly as we placed him in a cardboard cat carrier with a blanket inside. He would stop meowing when I stuck my hand in to pet him, but every stop light or strange sound scared the poor little guy.

When we got home, Mr. Pibb was completely silent sitting in his cardboard box as we prepared a room for him. Experts say kittens need a room just for themselves when they first come home, so we kitten-proofed my bedroom, set up a trickling “cat fountain” which kittens love to drink from, got some kitty food and toys and introduced Mr. Pibb to his new home.

Getting a kitten was a decision that we didn’t take lightly, nor should you. We debated the idea for weeks — calculating what a cat would cost to take care of, discussing how we would raise it. But after four months with Mr. Pibb, we both confidently say it was the best decision we’ve ever made.

Mr. Pibb has stolen my heart and the hearts of all of my family and friends. Everything he does is adorable or hilarious. I wake up every morning with Mr. Pibb cuddled up next to me. As I get ready for work, he sits in the sink and begs me to turn on the faucet for a drink. When I take a shower, he’s there playing in the shower curtain.

Mr. Pibb has plenty of toys, but his favorite toy is a lollipop. We keep a bowl filled with lollipops in the kitchen, and each day he manages to fish one out. He loves to scoot them across the floor and hide them under furniture.

Pibb loves to help me cook and will sit on a kitchen stool for hours while I work on new recipes. He’s hypnotized by chopping vegetables or stirring stew pots. He’s also a huge fan of laying behind my laptop all day while I work, but he does have a tendency to step on the keyboard and mess up my writing.

He’s also a troublemaker. If you leave the cabinets open under the kitchen counters, he’s sure to weasel his way in there. We’re always checking to make sure we haven’t locked him in with the dishes. He also loves to hide under chairs before jumping out and grabbing hold of your foot.

And don’t even get me started with bugs. This cat will hunt down and eat a bug like he’s a panther hunting down prey in the rainforest.

Yes, my shelter cat has changed my life for the better. Now, I can’t imagine a world without him. If you could use some extra companionship or a way to reduce your lollipop intake, head down to your nearest shelter and inquire about an adoption. There are plenty of wonderful cats and kittens out there who would love to be a part of your family.

ALEXA MASSEY is a staff reporter for The Farmville Herald and Farmville Newsmedia LLC. Her email address is Alexa.Massey@ FarmvilleHerald.com.