After conducting a search for a new county administrator, the Buckingham County Board of Supervisors found they only needed to look across the hall from long-time administrator Becky Carter’s office  to find her replacement.

The board hired Assistant County Administrator and Finance Director Karl Carter to be Buckingham County’s new county administrator during its Monday, June 14, meeting. 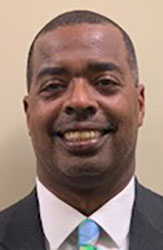 Carter, who has been working for the county since 2005, is a Buckingham native.  He grew up in the Slate River District as one of five siblings. The son of Allen and Katie Carter, Karl Carter is a Buckingham County High School graduate. He has been married to his high school sweetheart, Renee for 25 years. The two have an adult son, Kris.

Carter began his career as a banker in Charlottesville, but after a couple banking consolidations he began to look for a more stable career choice.

“Lucky for me, my wife was reading The Farmville Herald and saw an ad for finance job in the county. All the things they had listed on the qualifications, I did at the bank,” Carter said. “That’s how I came here. I’m just lucky my wife happened to see the paper and see that ad.”

“She’s always taking credit for me getting this job because she says, ‘I’m the one that saw it in the paper.’” he said.

The couple live in the Mayesville district, close enough to the county administration building for Carter to walk to work.

After serving as a finance director for three years, County Administrator Becky Carter suggested Karl Carter be promoted to assistant county administrator. That set him on the path to eventually succeed the long-time administrator.

“I’m blessed and lucky that I got to work for her all those years,” Karl Carter said of Becky Carter who officially retires June 30. “I got to study her and see how local government is run and see what the county administrator does or doesn’t do.”

“I recommended he be promoted to assistant county administrator where he could step outside of the finance box a little,” she said. “Because to be an administrator, you need to step out of the box and learn other things. He was very helpful in managing projects. I think all of that helped him be in line to be considered for county administrator.”

Karl Carter said the fact that he has first-hand knowledge of Buckingham County its history and insight of what is going on was a strong point in being promoted to the county administrator’s role.

He said Becky Carter involved him in the budget process and helped prepare him for the job.

“We’ve always worked on the budget every year. She took me under her wing and we went to several meetings with other committees and gave me opportunities to learn from her,” he said.

Becky Carter said she and Karl Carter always worked well together. She said the key now will be for her former assistant to establish himself in the lead role as the top administrator for the county.

Buckingham County Board of Supervisors Vice Chair Thomas Jordan Miles III said Karl Carter’s experience in county government has prepared him to be successful in his new role for the county.

“I’m excited to work with and alongside our new county administrator, Karl Carter, who possesses a wealth of county government and community skills, knowledge and talents. He served with the county for 15 years, starting as finance director, transitioning to assistant county administrator approximately eight years ago,” Miles said. “He has played an integral role in many successful projects and transitions, notably his involvement in the county budget and county finances, and supervision of other departments outside of finance.”

“There’s probably some little small things we may be able to do more efficiently, but there’s not anything major I can think of off the top of my head that I have had dreams of changing on day one,” he said.