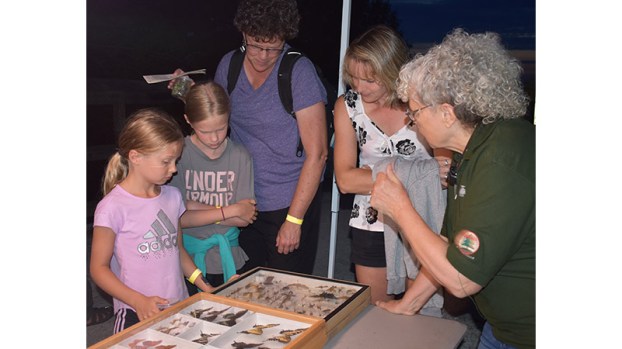 Campbell and Brooke Coffin look over a collection of insects shown by Ann Ligon, a volunteer for the Friends of High Bridge as Janice Baum and Christy Gross look on. 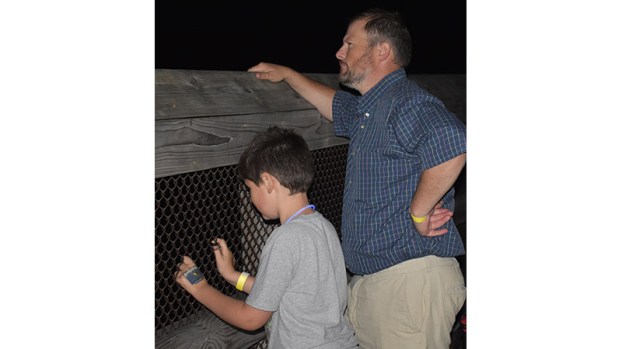 Isaiah Gowin, 9, and Matt Gowin look to see the fireflies twinkling in the trees below the High Bridge. 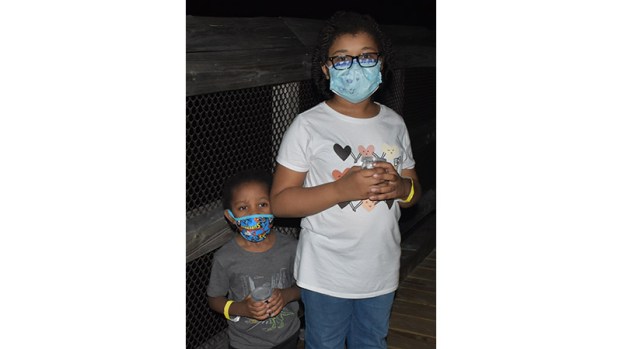 Isaiah Brown, 3, and Amiya Delaney, 8, spent Friday, June 18, at the annual Firefly Festival at High Bridge watching the light show of twinkling fireflies below the bridge. 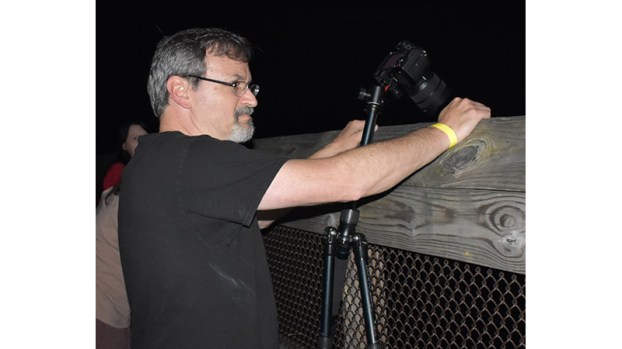 Brad Schneider was using long exposure to see if he could get some photos of the fireflies twinkling and flashing in the trees below High Bridge. 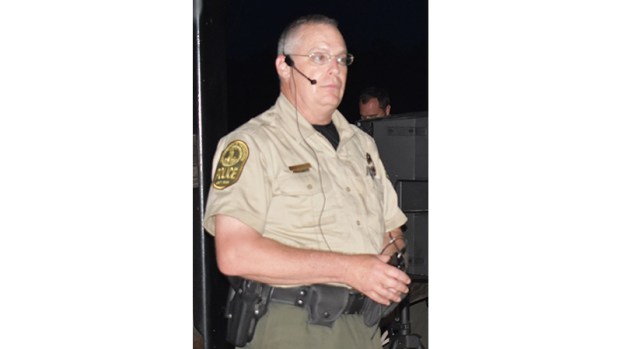 Chief Ranger Craig Guthrie tells those gathered some interesting facts about the lives of fireflies. 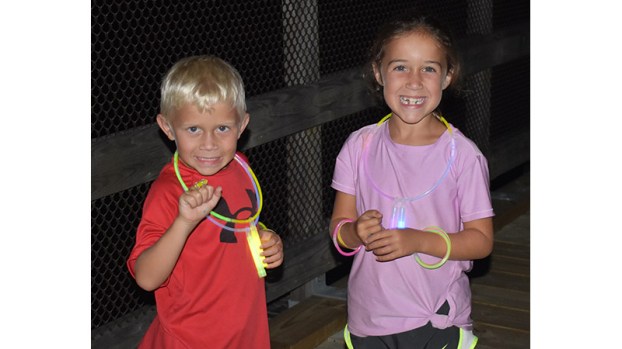 Whitt Taylor, 5, and Leighton Taylor, 7, came prepared for the event with fluorescent necklaces and armbands.

The trees below the High Bridge twinkled like thousands of Christmas lights had been strung through them Friday, June 18, on the first night of the state park’s annual Firefly Festival.

An estimated 250 firefly enthusiasts spread across the High Bridge to see the natural light show. Stars twinkled in the sky above the High Bridge with a moon shining bright. This, combined with the twinkling of the fireflies below the bridge, gave a uncommon duality with stars seemingly above and below.

Children wore neon necklaces and wristbands while some adults attempted to capture the firefly light show with cameras.

The event, which took place last Friday and Saturday nights, returned this year after COVID knocked the event off the calendar last year. Still, attendance at this year’s event was limited to 250 spectators on the bridge each night compared to the more than 1,000 that showed up to see the firefly light show two years ago.

While waiting for darkness to fall and the fireflies to begin their nightly show in the forest below, High Bridge Park Manager Daniel Jordan told those gathered about the history of High Bridge. Chief Ranger Craig Guthrie talked about how the festival began.

Guthrie said the firefly light show under the bridge was discovered accidently while doing other night-time programs in the park.

“We noticed the phenomenon over Buffalo Creek when we were doing an astronomy program out there because we hadn’t opened the High Bridge at that point yet,” Guthrie said. Instead of looking at the stars in the sky, those gathered spent as much time observing the fireflies putting on a show of their own.

Guthrie also provided some interesting firefly facts. With the area below High Bridge prone to flood, Guthrie was concerned one year that rainy weather and flooding would kill the firefly larvae and greatly diminish the festival that year. Instead the festival was one of the most active for the fireflies to date.

“I had done some research and learned that the larval state of fireflies can remain submerged underwater for 30 continuous days,” he said. “So they are well adapted to live in places that are prone to flooding.”

Another odd thing about fireflies, or lightning bugs, as some people refer to them, is that they glow in one form or another from birth until death.

“Every life stage of a firefly is luminous,” Guthrie said. “It’s incredible, and it’s hard to understand why, but their eggs glow, and they hatch into larva, and the larva stage glows. You will see the larva stage around here in September in the grass of your lawn. We call them glow worms.”

The reason adults have lights and blink is to find each other in the dark to mate. Guthrie said there are up to 125 different species of fireflies in the area. Each species has a pattern of flashes to attract mates of the same species.

“They have all kind of different ways to flash,” Guthrie said. “Some of them are very rhythmic, and some of them are almost like Morse code with dots and dashes. Some of them will start out dim and get really bright and then suddenly stop.”

With darkness quickly enveloping the High Bridge, stars twinkled above and fireflies twinkled below in a purely natural summer light show unique to this area.