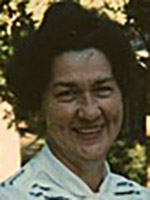 Dolores Jarrett Beuth, her friends called her Dodie, grew up in Belle, West Virginia, located just east of Charleston. It was a small town where most residents worked for the large DuPont chemical plant on the west side of town. She also lived for 4 years in Morgantown, West Virginia, when her father moved there to work in a munitions plant during WWII. She was crowned Miss DuPont High School in her senior year of 1953 and went to work immediately after graduation.

It was at work that she met Jack Beuth. It was love at first sight and within a month they were married. Soon after marrying, Dolores and Jack used savings and money borrowed from Dolores’s parents to buy two side-by-side lots near Belle. They began building a house on the first lot. Jack would work on construction after working the midnight shift for DuPont and Dolores would buy all building supplies and lend extra hands when needed. Before the first house was finished, they sold it to a person who drove up and just happened to be looking to buy a house. They then built their own house on the second lot, with enough remaining funds to pay back Dolores’ parents and have leftover money in the bank.

In 1962, Dolores and Jack moved to Richmond, where Jack worked as a chemist at Reynolds Metals. They built their own home in Bon Air, which was the fourth home they built together. They raised two children, Debbie and Jack, in their Bon Air home.

In the 1970s, Dolores worked at the United Virginia Bank in Forest Hills and in the 1980s she worked at Ukrop’s on Forest Hill Avenue. At that time it was unusual for suburban housewives to have their own jobs.

In 1983, hard work and saving earned Dolores and Jack an early retirement and they moved to Cumberland for a second life in the country. In their “retirement” they purchased and rebuilt two historic homes and were working on a third when they finally slowed their pace. Dolores was active in Cumberland politics for many years and fought fiercely against a proposed dump site in the eastern part of the county.

Jack passed away on the first day of spring, 2007.

One of Dodie’s favorite sayings was, “Always look ahead and never look back.” Until just last year, she could still be seen cutting grass on her bright yellow lawn mower. Online condolences may be made at bennettbardenfh.com