Amos is hitting his stride on the track 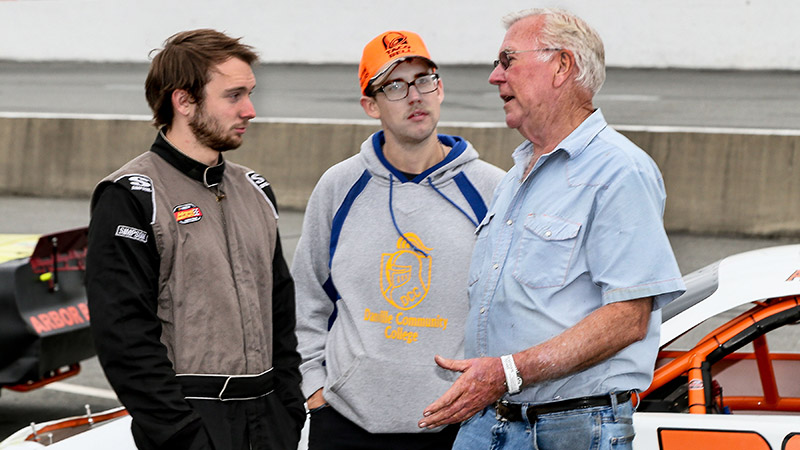 Andrew Amos has made a lot of progress this season and is starting to hit his stride as South Boston Speedway nears the midpoint of its 2021 season with the June 12 running of the Halifax Insurance NASCAR Late Model Twin 75s racing program.

The Callands resident is one of the new young drivers competing at South Boston Speedway this season, and he is making steady progress climbing the ranks in the track’s NASCAR Limited Sportsman Division.

Amos has logged three top-five finishes in his last four starts and has not finished outside of the Top 10 through the first seven races in the division this season. He sits in fourth place in the Limited Sportsman Division point standings, only three points behind third-place driver Brent Younger of South Boston. It’s a solid performance for a new racer.

“I had never raced anything until I bought this car two years ago,” Amos pointed out.

Like all new racers, the more seat time he gets, the more Amos improves. In three of his last four starts Amos has finished in the top five.

“Every time I go out in practice and I’m behind somebody I can watch and see what they’re doing, and that definitely helps.

“A lot of guys that come down here have somebody in their family or team that has raced here before and has somebody to lean on. Nobody in my family or crew has raced anything before. It’s all up to me as far as the driving part goes.”

“We put a new front clip on the car this year,” Amos said.

“The car drives a little differently. All of the front geometry is different from what I had on the car last year. My dad (Allen Amos) has been going through a big learning curve keeping up with that. He’s doing a really good job.”

Amos’ recent series of solid runs is bringing him closer to the goals he has set for himself and his team this season.

“When we came down here for the first two 25-lap races this year it was the first time I had been on South Boston Speedway,” Amos said.

“I just wanted to finish on the lead lap in both races, and we did. I was really happy with that. Now, I want to get on the podium at least one night, be in the top three, so I can tell everyone about my good sponsors and the people that helped get me here.”

The June 12 race day schedule has registration and pit gates opening at 2 p.m. Practice will begin at 4 p.m. and grandstand gates will open at 5:30 p.m. Qualifying will start at 6 p.m. and the first race will get the green flag at 7 p.m.